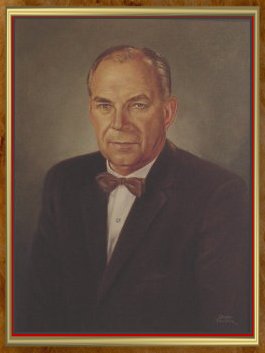 A native of Canada, Dr. Delmar T. Oviatt received his bachelor’s degree from the University of Alberta in 1939. He earned a master’s degree in 1942 and a doctorate degree in 1949, both from Stanford University. Before entering higher education, Oviatt was a teacher and administrator at the junior high and high school levels in Canada. He also taught at Washington State College and the University of Utah before moving to Los Angeles.

Oviatt was named dean of the proposed Valley campus of Los Angeles State College of Applied Arts and Sciences in 1955 by President Howard McDonald. Previously, Oviatt had served as chair of the division of education at what would later be known as California State University, Los Angeles.

In the process for selecting the campus president of San Fernando Valley State College, Oviatt was passed over in favor of Ralph Prator, who began serving on July 1, 1958. Oviatt became Dean of Instruction of the new campus in 1958, and was named Vice President for Academic Affairs in 1962. After Prator's abrupt resignation in 1968, Oviatt was briefly appointed acting interim president in January 1969, during a time of intense campus protest.

When Delmar Oviatt passed away from a heart attack in his home on December 24, 1971 at the age of 60, the January 4, 1972 issue of The Sundial succinctly covered his career history, with no mention of the history of ethnic tensions on the campus during his tenure. In 1973, the new Library building at CSUN was named after Delmar T. Oviatt to honor “the university’s principal academic officer from 1958 to 1969.” The February 14, 1973 Daily Sundial reported that the Faculty Senate convened an ad hoc committee to "recommend a fitting honor for the late administrator… The committee unanimously recommended a resolution to name the Library after Oviatt." The resolution was approved by University President James Cleary and later ratified by the CSU Board of Trustees.

The February 14, 1973 Daily Sundial quoted CSU Chancellor Glenn Dumke as follows: “It is most appropriate that this building be named for Dr. Oviatt, whose guiding insistence on academic excellence long stimulated the intellectual life of the Northridge community.”

Controversy arose in the spring of 2019, when members of the Students of Color Coalition (SCC) alleged that Delmar Oviatt was a “racist and oppressive figure,” who was “…a persistent opponent to the creation and existence of cultural studies during the period of his tenure as President.” The SCC demanded that his name be removed from the Library. In response, CSUN President Dianne Harrison appointed a Working Group, made up of faculty, students, administrators, and alumni, to investigate these allegations.

The Working Group did not conclude that Oviatt was a racist. However, the Group did find that “Oviatt’s actions were detrimental to the University and its students of color” and that he failed in his leadership responsibilities during a critical time in CSUN’s history. In December 2020, the Delmar T. Oviatt Library was officially renamed “University Library.”