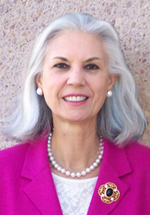 Sue Curzon served as Dean of the University Library for California State University, Northridge from July 6, 1992 through December, 2010.

During Sue's tenure, the Library and the University saw many changes. In 1992, when student enrollment was a little over 29,000, the Library's collection was already substantial, including over 1 million print volumes and 17,000 audio recordings, with subscriptions to over 3,400 print periodicals. Over the next eighteen years the Library added nearly 400,000 volumes. As the result of the merging of Media Library into the main collection, video and DVD holdings increased over 400% in 1999, and has been growing steadily ever since. The turn of the millenium saw the introduction of the first electronic periodicals, and e-books followed close behind. In 1999 the Library received the first of two Library Services and Technology Act grants to develop the San Fernando Valley History Digital Library collection, ushering in a new era of digital archiving at the Library. As the depth and variety of Library resources grew, so did its instructional services, with the number of library instructional lectures taught increasing 65% by the 2009-2010 academic year.

Sue presided over the cleanup and rebuilding of the Library after it was badly damaged in the 1994 Northridge 6.7 earthquake. The earthquake recovery effort dominated Sue's daily schedule, with substantial time devoted to the restoration of services and the reconstruction of the 235,000 sq. ft. library building. After the earthquake, Sue worked with Library Development to establish the Library's endowments, which as of her retirement totaled over $3 million.

The post-earthquake period coincided with Sue's oversight of campus information technology (1993-1998), including the administrative systems, the voice, video and data network and academic technology support. Those systems were devastated by the earthquake and also had to be rebuilt and redesigned.

One of Sue's primary concerns as Dean was to ensure the Library was a place where students felt welcome. The rebuilt Library added study rooms for graduate students on the Garden Level. Later years saw the addition of updated student lounges in the reference room and RPM area, and in 2010 a coffee cart opened in the Library lobby.

Sue Curzon began her career as a special librarian for Kennecott Exploration--a deep-sea mining company. Prior to her tenure at California State University, Northridge, Sue was the Director of Libraries for the City of Glendale, California where she directed a Central Library, four branches and a bookmobile. Sue also worked for the County of Los Angeles Public Library in various positions, including as a Regional Administrator, where she supervised 11 branches, a books-by-mail service, four bookmobiles, and libraries in jails, and as the Coordinator of Adult Services, where she directed reference services for 92 branches and as a branch manager. She also had experience as a reference librarian and as a coordinator of children's services.

Sue is the author of the books entitled, "Managing the Interview" and "Managing Change," and co-editor of "Proven Strategies for Building an Information Literacy Program," all published by Neal Schuman. Sue has made many speeches, keynote addresses and presentations on various subjects including managing change and other management topics, libraries of the future, disaster restoration and information literacy.

Sue was Library Journal's "Librarian of the Year" in 1993, a nationally recognized award. She was awarded a "Distinguished Alumna" from the University of California, Riverside in 1994 and "Administrator of the Year" by Cal State Northridge's student body in 1996.

From 1995-2002, Sue was the Chair of California State University's Information Competence Committee which developed an information literacy program at all 23 campuses. During the last three years of her term as Dean, Sue led the system-wide effort to develop a CSU Virtual Library to provide universal access to all students and faculty.