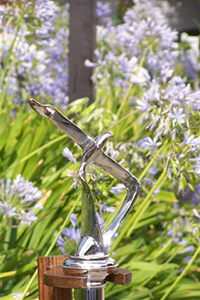 The mace presented to California State University, Northridge, by the Bibliographic Society of CSUN (precursor to the Friends of the Library), commemorated the occasion of the University's 25th Anniversary. The soaring bird atop the staff symbolizes academic freedom, while the silver marks the Silver Anniversary of CSUN. It was carried in 1983 (for the first time) in the Commencement Processional by Norman E. Tanis (then Director of University Libraries, and Executive Secretary of the Bibliographic Society), who acted as Sargent-at-Arms.

The mace represents the joint work of Tanis, who originally conceived the idea of the mace for CSUN; Charlotte Oyer (Reference Librarian) who performed the basic research concerning the ceremony and surrounding and uses of the mace; and Bert Hultman (Staff Services Technician) who worked with Tanis in locating the manufacturer and in determining the final design. 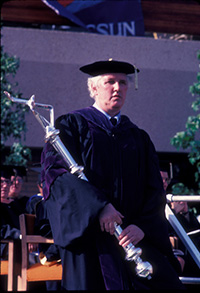 The mace was constructed by a former CSUN student, Jeffrey Roter, who is the owner of a lighting manufacturing company in Chatsworth. He worked closely with Tanis and Hultman to design and produce the mace for the Commencement ceremony.

A mace is a ceremonial staff used as a symbol of authority. In the Middle Ages the mace was a heavy club with a spiked or flanged metal knob at one end, used chiefly by knights to crush the armor of opponents. Royal bodyguards often carried maces to protect their monarch in processions. By the 14th century, maces had become more ceremonial in use and were decorated with jewels and precious metals, losing their war-club appearance. Maces were no longer used as weapons after the 16th century.

The ceremonial mace is usually 3 or 4 feet (about 1 meter) long. In the sessions of the British House of Commons, the mace is placed on the treasury table, and in the U.S. House of Representatives it is placed to the right of the speaker. A mace is often carried in academic and ecclesiastical processions, particularly in English-speaking countries, and frequently before magistrates in Great Britain. (Encyclopedia Americana, Volume 18.)