In Protest: The Shifting Paradigms of Collective Social Action 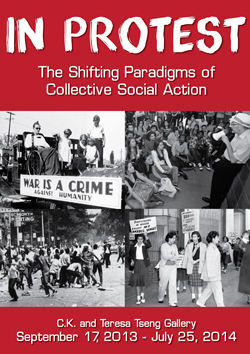 Collective social action movements have been a part of American life since the nation's earliest days whether spontaneous expressions of dissent or high-reaching attempts to change society. While protest movements are not an exclusively American phenomenon, our ability to express dissent has become a defining characteristic of our American identity, rights, and freedoms.

Causes for which individual citizens have been willing to act as catalysts of change have cut across the political spectrum. In the 20th century, in particular, protest movements have so irrevocably changed society that the circumstances and motivations of individual participants, as well as the questions of who joins a movement and why they do so, have become the subject of intense study.

On display in the Gallery are selections from Special Collections & Archives that document dozens of distinct and significant social action movements over the course of the 20th century. The causes that inspired individuals to take action have been international, national, and local in scope. Whether expressed via boycotts, demonstrations, riots, property destruction, occupations, labor strikes, local activism, or works of art, these protest actions have spanned the political spectrum, and have defined and shaped our uniquely American identity. For more information call (818) 677-2638.