Lorrin A. Thurston and the U.S. Annexation of the Hawaiian Islands 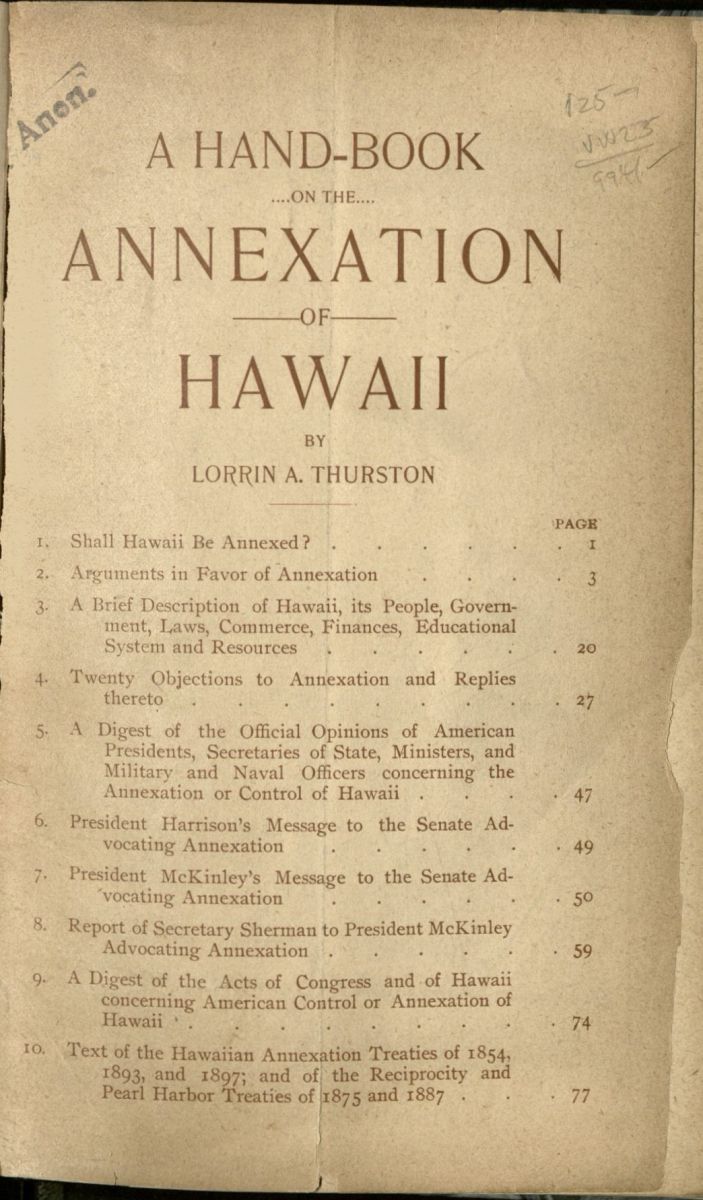 Special Collections & Archives holds a pamphlet from 1897 titled A Handbook on the Annexation of Hawaii written by Lorrin A. Thurston (1858-1931). Thurston, the son of American Protestant missionaries, was born and raised in Honolulu, Hawaii. He attended law school at Columbia University in New York beginning in 1880, and opened a law practice in Honolulu in 1883.

In order to better understand the context around this pamphlet, which advocates for the annexation of Hawaii, a brief look at the political and social history of the Islands and the illegal U.S. overthrow of the Kingdom of Hawaii is useful. Before European contact with the Islands, native Hawaiians lived in a very structured society with a social caste system and a governing hierarchy similar in some ways to European medieval feudalism. By 1810, King Kamehameha had united the islands, ended their form of feudalism, and entered into a constitutional monarchy.

Jumping forward in time to 1886, Lorrin Thurston was elected to the Hawaiian legislature. After taking office he advocated strongly for government reform. When his advocacy was unsuccessful he turned to other means, becoming a leader in the 1887 rebellion that forced King Kalākaua to accept a new constitution. Thurston helped to author this new constitution which limited the power of the monarch and tied both voting rights and membership in the legislature to property ownership. Signed by the King under threat, this constitution is also known as the "Bayonet Constitution."

With other members of the 1887 rebellion, Thurston then organized a coup against Queen Lili'uokalani in January of 1893. U.S. Foreign Minister John L. Stevens activated one company of Marines and two companies of sailors stationed in Honolulu Harbor aboard the USS Boston. The presence of armed and uniformed members of the U.S. military had an effect. To protect the lives of Hawaiians, Queen Lili'uokalani decided to surrender.

Thurston traveled to Washington, D.C.: before the monarch's overthrow in 1892, and after it in 1894 to lobby Congress for the annexation of Hawaii. His advocacy for annexation included the very pamphlet which is now housed in Special Collections: A Handbook on the Annexation of Hawaii. The pamphlet is 83 pages and illuminates many of the intricacies of 19th-century American politics, culture, and expansionism. In the pamphlet,Thurston makes five arguments for annexation and rebuts several arguments against annexation. It also contains a brief profile of the Islands and statements from several prominent American men in favor of annexation.

All of the arguments in favor of annexation either implicitly or explicitly refer to the commercial interests of the United States. One also asserts that the Hawaiian Islands are a strategically important location for commerce as well as for the protection of the American West Coast. Another included the racist statement, "The only possible result is the absolute substitution of the Asiatic in the place of the white man, by reason of the fact that the Eastern standard of civilization and living is so much lower than the West…" Thurston then enumerates and rebuts several opposing arguments, including those that question the constitutionality of such action, the expenses and other resources required to keep and protect the Islands, and the legitimacy of the newly-installed government of the Republic of Hawaii.

In the end, Thurston's arguments prevailed, and the U.S. Congress annexed the Islands by treaty in 1898. Disenfranchised Hawaiians did not vote on the issue of annexation. It took an additional two years for the U.S. to institute dominion over the Islands. The first territorial governor, appointed by President William McKinley, was former coup leader Sanford Dole. In 1993, 100 years after the overthrow of the Hawaiian monarchy, the U.S. Congress issued a Joint Resolution United States Public Law 103-105, (or the Apology Resolution) signed by then-president Bill Clinton, which states:

Further materials in Special Collections about Hawaii in the 19th century through the lens of the west, including details on its geography, agriculture, and customs, can be found in publications such as Narrative of the United States exploring expedition during the years 1838, 1839, 1840, 1841, 1842 and What I saw on the west coast of South and North America, and at the Hawaiian Islands.