Some Peek in the Stacks blog posts are authored by CSUN students who work in Special Collections and Archives in the Oviatt Library. This week's post was written by Cameron Takahashi, a student assistant in Special Collectons. Cameron is an undergraduate student majoring in Sociology 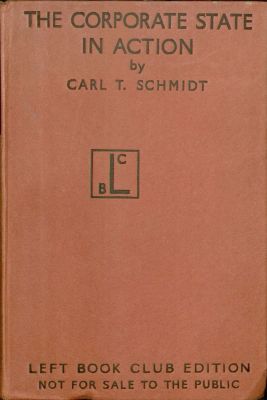 The Left Book Club was a left-wing organization founded in 1936 by labor politician Sir Richard Stafford Cripps, Sir Victor Gollancz, a publisher and humanitarian, and Evelyn John St Loe Strachey a labor politician and writer in the United Kingdom. Its primary purpose was to speak out against fascism and promote peace in the world through its publications. The club supplied a book title for purchase by members every month that covered a number of topics, including science, reporting, fiction, and a range of other subjects, from a left-leaning perspective. By 1948, the organization had ceased operation, primarily due to financial troubles. Special Collections and Archives holds more than 100 titles published by the Left Book Club.

The Left Book Club printed and distributed a plethora of books on various topics. Some of the works were simply reports on current events, while others are geared specifically for left-leaning individuals. In part, the organization was designed to give equal visibility and presence to left-leaning topics and ideas, offering a perspective that differed from publications funded by conservative groups, right-wing oligarchs, and landowners. These books were specifically commissioned and printed for the sole purpose of distribution, and not for profit.

We kick off this journey into Left Book Club with the work, The Labour Party in Perspective. Here, the author discusses the nature of the labor movements in Britain, in particular the specific ideology, the demands, and roots of the Labour party. The Labour party during that time was a strong force that advocated for pro-worker legislation and pro-worker systemic change, essentially riding on an ideology of respecting work equally. They had many different goals, such as increased pay, increased worker involvement in private ownership, and development of unions, to name a few. The purpose of this book is to spread awareness about the party to those who were interested in learning more about its historical context so that people would understand the organization more fully and completely.

The Left Book Club promoted publications that would raise awareness about the history of fascism and corporatism, how it gathers strength, and what happens when this kind of power is consolidated. For instance, a reaction against Mussolini in Italian Fascism is written here, in The Corporate State in Action. In the book, the author discusses the various ways that fascism was able to rise to power and exactly what happened when they took power. In particular, they place heavy emphasis on the rhetoric used by the Fascist leaders, the economic pitfalls and meetings that occurred behind closed doors that resulted in government corruption, and ultimately the connection between heavy corporatism and the state. The book was printed and distributed for the purpose of warning citizens and demonstrating what signs to look for in a Fascist government.

One of the main ideas addressed in Left Book Club literature is the nature of propaganda in maintaining fascist structure. While they address that most nations and members of the political theater have used propaganda in form, The New Propaganda emphasizes the role of technological development in creating propaganda, only to be used by the state that facilitates such development in the first place. In particular, they denote the change that occurred due to the increasing capability to spread particular thoughts and words to create dissent or cohesion. The purpose of this work in particular is to demonstrate how and why propaganda works, so that it can be responded to and used to the advantage of left-leaning people and organizations.