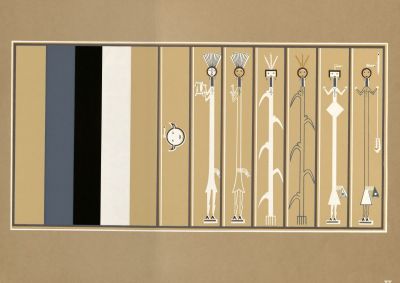 The Navajo is currently one of the largest Native American tribes in the United States, located primarily in Arizona and New Mexico. Archeological evidence suggests that the Navajo migrated from Alaska and Canada into what is now the American Southwest circa 1400. The original treaty with the United States (1868) was supposed to give the Navajo just over 3.3 million acres of land but many individual Navajo returned to the areas in which they had previously lived, whether it was inside the reservation boundaries or not. Since that time the area of the Navajo Nation has increased in size to over 18 million acres.

Where the Two Came to Their Father, A Navaho War Ceremonial,, compiled by artist/ethnologist Maud Oakes was recorded as presented by Navajo hataałii (singer, or medicine man) Jeff King in 1942-3 and was published in 1943. Special Collections and Archives has the second edition (1969) of the book along with the accompanying silk screen reproductions of the sand paintings used in the ceremonial. The War Ceremonial was revived by 20th century Navajo to sendoff young Navajo leaving the reservation to serve in the US military during WWII. The ceremonial was intended to protect the soul of the warrior who would be so far from his people. Several hundred Navajo served in the war, including approximately 400 Code Talkers.

Beginning with an introduction to the Navajo, the 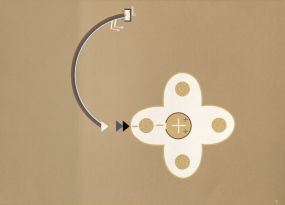 book informs readers of an earlier state of understanding possessed by "white-men" and the genesis of a new understanding. Ms. Oakes then recounts the interior of the hogan (the traditional dwelling of the Navajo), describes a Blessing Rite, and tells how the war ceremonial was given to her.

But more than just the legend of the Two, the volume tells the Navajo creation story, How The People moved from the world beneath into this world and what followed, leading up to the story of Two young heroes, Navajo warriors that travel to the home of their father, The Sun, and return with the power to destroy the monsters troubling their people.

The publication also includes commentary by mythologist Joseph Campbell. He gives the rite context, writing "...in the old times, when the warriors were about to go on a raiding party, word would be spread to be ready in two or three days … The ceremonial of Where the Two Came to Their Father was performed before they departed" (p. 7).