Some Peek in the Stacks blog posts are authored by CSUN students who work in Special Collections and Archives in the Oviatt Library. This week's post was written by Brenton Contreras, a student assistant in the International Guitar Research Archives (IGRA). Brenton is an undergraduate majoring in Guitar Performance. 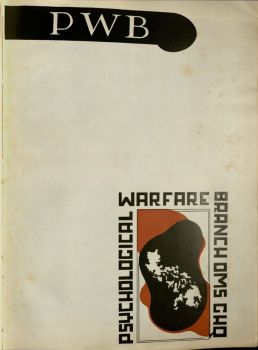 Psychological Warfare is the military application of the science that analyzes, influences, and predicts the behavior of people. It is primarily a technique used to destabilize or demoralize enemy combatants, and has become an incredibly useful tactic within the military’s arsenal. When used successfully, the target is overwhelmed with information that triggers emotions such as hate, pain, loneliness, fear and humiliation, so that the target’s desire to continue or resist is crushed.

Special Collections and Archives holds a fascinating example of this tool that documents the psychological technique. The Psychological Branch Warfare Scrapbook was created to demonstrate the United States’ use of psychological warfare during World War II. A commonly-used tool during this conflict, it was used by countries on both sides in different ways to push their agendas forward. Psychological Warfare or PSYWAR is meant to be very deceptive and manipulative by nature. During WWII, most of the information presented through PSYWAR was very heavily biased. It was used to change the minds of combatants and civilian populations alike in both European and  Pacific theaters. During events of severe unrest, even neutral populations could fall victim to psychological warfare.

The Psychological Branch Warfare Scrapbook is filled with leaflet after leaflet, and 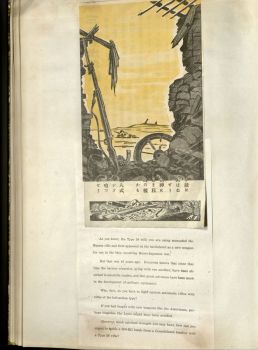 presents the United States' extensive use of this military tactic. Each leaflet is well-thought out and organized to create the biggest impact on the intended target. There are leaflets that address numerous emotions, used systematically and aggressively to slowly break the will of Japanese soldiers and civilians. The total spectrum of emotions that were presented through these leaflets ranged from a kind to stark warnings from the US about the consequences of the ongoing conflict for the Japanese people. Depending on the intended target, the Americans presented themselves as either benevolent friends or malevolent foes, sometimes at the same time within varying leaflets.

This scrapbook presents an interesting look back on psychological warfare’s rise and growth in the not too distant past. These tactics that were masterfully executed by the American military during the Second World War have slowly over time become a tool utilized by marketing departments within all major companies today. Nowadays, every one of us is inundated by propaganda, as this material is more commonly called. Everywhere we turn, including our social media accounts, we are being targeted by these strategies. It is amazing to see how far these strategies have come and how deeply they are ingrained within everyday life. Each of us is vulnerable to the grasp of this modern form of psychological warfare. Can you spot it when that happens?