The Short, Happy Life of the Valley Music Theatre

A little over fifty years ago, businessmen Nick Mayo, Randolph Hale, and Cy Warner brought what they considered to be the first professional performing arts center to the San Fernando Valley. Designed by the architectural firm Hawkins and Lindsey, plans called for a theatre-in-the-round, with a revolving stage located in the center and the audience seated on three sides, which enabled actors to enter and exit the stage from different directions. The unique theatre dome was created by pouring cement over a mound of dirt and then digging out the dirt after the cement set. Built on an 8.3-acre site on the south side of Ventura Blvd., the Valley Music Theatre had the capacity to seat 2,500 people with every chair removable for ultimate venue flexibility. Original planning for the theatre also envisioned concerts, sporting events, and conventions when regular performances were not held. 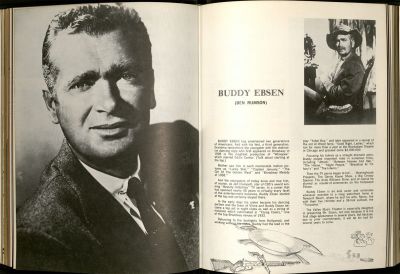 Funding for the project was largely based on a profit-sharing plan that included actors such as Ginger Rogers, Jane Powell, and John Raitt, who also performed over the first twenty weeks of the season. The Valley Music Theatre opened on July 6, 1964 with a memorable performance of The Sound of Music starring Janet Blair and John Myhers. It was an immediate hit, and during the first year the theater played to 82% capacity. In its second year, the theatre produced Broadway favorites such as Pajama Game and Camelot, as well as the drama Come Back, Little Sheba. However, by the 1966 season, ticket sales were dwindling and by the end of the year the Valley Music Theatre closed its doors and claimed bankruptcy.

In July 1972, Marquee Enterprises, Inc. in partnership with entertainer, Sammy Davis Jr. and lawyer/entrepreneur, Joseph Borenstein, announced that the Valley Music Theatre would reopen under new ownership and management. The first season boasted a parade of stars, including comedian, Don Rickles, and the musical talents of Ike and Tina Turner, Pearl Bailey, Ray Charles, and B. B. King. The theater also became a popular location for sporting events, including boxing matches that featured such pugilists as Ray White, Chuck Hamilton, and Dwight Hawkins. Despite the venue’s initial popularity as an entertainment and sports venue, investors continued to struggle financially, and the doors eventually closed again.

In 1980, the theater was sold, and became a Jehovah’s Witness 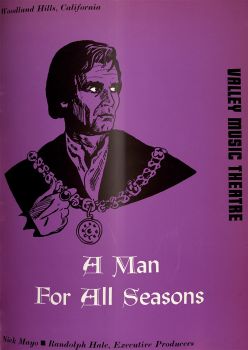 Kingdom Hall. By 2004, Jehovah’s Witnesses’ membership outgrew the size of the building and the property was sold to a local developer who planned on demolishing the theater to build housing and retail stores on the property. In 2006, a plan to place the Valley Music Theatre before the Landmarks Commission fell short of time and Larry Underhill was hired by the Los Angeles Conservancy to take the last pictures of the building before it was demolished.

The short, happy life of the Valley Music Theatre is documented through two collections held in Special Collections and Archives. The Nick and Faye Mayo Valley Music Theatre, Inc. Collection contains bound playbills and programs, a scrapbook of photographs and newspaper clippings documenting construction and performances at the theater, general Los Angeles theater news, and sixty photographs. The images include pictures of the construction of the building as well as cast photographs. The Valley Music Theatre Photograph Collection contains the last documentation of the theatre designed by Hawkins and Lindsey, Architects, before the building was demolished in 2006, including two architectural drawings—one of the exterior elevation plan and the other a site map, and forty-six Silver Gelatin photographs of the theater taken by Larry Underhill.