Media to Maker: The CMS Reimagined

In July 2022, the department better known as the ‘CMS’ officially changed its name from Creative Media Studio to Creative Maker Studio to highlight the shift from primarily digital media services to more physical, maker-focused crafting which aligns with the current 3D printing and button making services. The name change also affirms the department’s status as the Library’s official Makerspace. The CMS will now be the first stop on a student’s quest to tinker, explore, and discover new technologies. With a low barrier for entry, students of any major can learn, create, and expand their skillset for projects that would otherwise be unavailable to them in their major classes.

Students who want to advance their sewing skills will soon be able to either check out a Sewing Machine Kit to take home or reserve our Sewing Machine Craft Room to work on their projects in the Library!

Coming soon inside the Library, the CMS Virtual Reality Room will feature an HTC Vive paired with a powerful gaming computer. With Unity, students can also develop their own VR games and test them out in real-time. Soon students can even take the technology home with our Oculus VR Headset checkouts.

A multipurpose Production Room will soon offer students the space and professional tools to shoot a wide range of video or photo projects. Equipped with high-end lighting, sound treatment, and colored backdrops the space will be perfect for interviews, video podcasts, photo shoots, and much more!

Soon, students can transform a simple graphic or text phrase into a single-color sticker using the CMS Vinyl Cutter. Students will have the ability to cut out their favorite design on sticky vinyl paper for a variety of uses.

A self-service 3D scanning and photo/film Creative Scanning Station is coming soon to the CMS. Fitted with a powerful laptop for optimal scanning, the desktop 3D scanner will be able to scan small objects to convert physical items into 3D models while our photo scanner’s robust software will make scanning photos and film a breeze.

The Making of the CMS

The Creative Media Studio (now known as the Creative Maker Studio) opened in Fall 2014 for current CSUN students as an extension of the University Library’s collaborative Learning Commons thanks to funding awarded through the Campus Quality Fee. The department better known as ‘CMS’ began its services with a focus on digital media creation. The space initially housed seven iMac computers loaded with audio/visual editing software, an onsite audio recording room, and photo/video equipment checkouts at the service desk.

As the department gained popularity over the years, more multimedia equipment was added to the checkout selection such as:

In Fall 2016, free 3D printing was introduced and has since become one of the most popular services available at the CMS. The department quickly outgrew its small structure as more 3D printers were added to help with the growing demand. The iMac computers were moved out into the West Wing with 12 additional Windows computers that included more diverse software offerings for 3D animation/modeling. After a long closure due to the pandemic, the CMS reopened in Fall 2021 to offer new virtual workshops and a button maker. 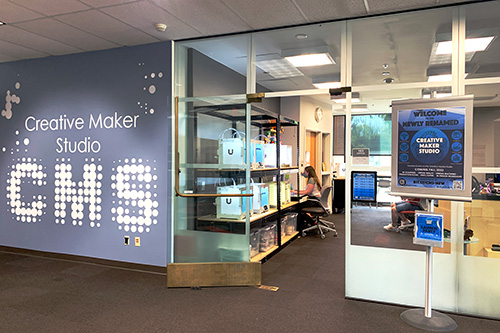 This Fall 2022 the newly renamed Creative Maker Studio will take over more of the Library’s West Wing with three new reservable rooms housing a sewing machine, virtual reality, and production lighting and backdrops. In addition, the refreshed space received a new paint job, updated furniture, and added areas for crafting and tinkering.