Student employees are the backbone of the Library. Just ask any staff or faculty member, and they will tell you that their department could not possibly function without the small army of student employees who come to work every day in the Oviatt Library. Each year the Library employs an average of 145 CSUN students who work in part-time positions ranging from shelving books to greeting the public at service desks. They are loyal and hard-working, and many go on to work in the Library or even go on to become librarians after graduation. 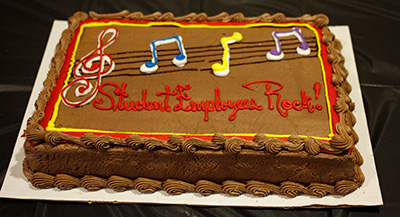 In recognition of their vital contributions, each year the Library’s student employees are honored in a luncheon ceremony held in the Oviatt Library Presentation Room. During the celebration, they enjoy themselves cheering for their friends and colleagues who have been nominated for one of the Outstanding Student Employee Awards, or who have applied for one of the Student Employee Scholarships. There is a program of games and entertainment, usually led by Master of Ceremonies Dean Arnold of Music & Media, and everyone has a good time. 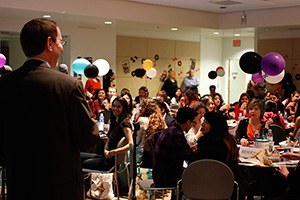 This year the ceremony was held on April 17, and $22,000 in scholarships were awarded to a total of 23 students. One student, health sciences major Ashley English, won two scholarships totaling $1,500. Ashley, who works in the Teacher Curriculum Center, was awarded both the Bonita J. Campbell WISE (Women in Science and Engineering) Endowment Scholarship and the scholarship donated by CSUN Librarian Emeritus Virginia Elwood. Ashley told a reporter from the on-campus publication CSUN Today that she was thrilled to receive the scholarships to help further her goal of attending nursing school. Another winner was Interlibrary Loan student assistant Erika Panosian, who received the Ardis Flenniken Scholarship. Winner Daniel Ramos works in the Circulation/Shelving unit and was the recipient of one of five Marianne Afifi Scholarships, which were funded by Gus and Erika Manders in honor of the Library’s Associate Dean. (A complete list of award recipients appears at the end of this article.) 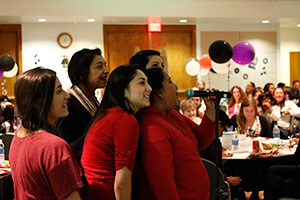 Besides the scholarship awardees, the day’s other winners were six young men and women who were selected for Outstanding Student Employee awards. They were William Broughton, who works shelving books in Circulation/Shelving; Cristal Diaz, from the Teacher Curriculum Center; Andrea Larco, who is a staffer on the Circulation desk; Crystal Monroy, from the Universal Design Center; Rachele Pedraza from the Teacher Curriculum Center; and Maher (Matt) Qassis, who works in the Library’s Collaboratory. Each student had been nominated by her or his supervisor for the award. (A complete listing of nominees appears at the end of this article.)

Enjoying the pizza and entertainment, and cheering on the nominees and recipients along with the students, were a number of the donors of scholarships and representatives of organizations which had provided funding for the awards. Donors present included Marianne Afifi and Virginia Elwood; also present were Bernice Haber from the Friends of the Oviatt Library and University Women’s Club representative Betsy Stelck.

Check out some of our winners in our gallery below.