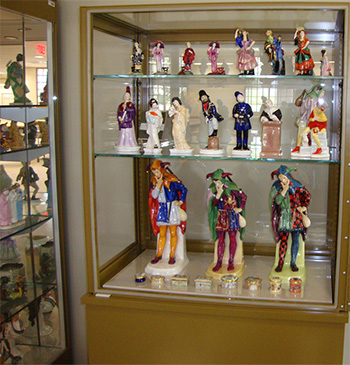 The British duo of William Gilbert and Arthur Sullivan were responsible for producing the most popular of English language operettas. These operettas are still performed by amateur and professional groups. Titles include HMS Pinafore, The Mikado, The Pirates of Penzance.

Over the past century there have been many ceramic figurines of the characters created by some of the most respected houses. Two display cases contain an exhaustive collection of these figurines dating from 1890 to 2010. Some are extremely rare or one-­‐of-­‐a-­‐kind. The bottom shelf of the case facing out shows three figures of Jack Point from The Yeomen of the Guard. The middle shelf shows figures from The Mikado and The Pirates of Penzance. Ten operas, the most popular, of the fourteen are represented by figures in the display cases.

David Trutt assembled his Gilbert and Sullivan book and ceramics collections over a twenty seven year period from 1988 through 2015. He donated the book portion to the Oviatt Library in 2007 and 2008. This portion numbers well over 800 items including books, music scores, and ephemera. It is in the library’s online catalog under the name The David Trutt Gilbert and Sullivan Collection. William Gilbert, the librettist, was born in 1836 and Arthur Sullivan, the composer, was born in 1842. The first and last of their fourteen collaborative efforts are: Thespis opening in 1871 and The Grand Duke opening in 1896. The other twelve are: Trial by Jury, The Sorcerer, HMS Pinafore, The Pirates of Penzance, Patience, Iolanthe, Princess Ida, The Mikado, Ruddigore, The Yeomen of the Guard, The Gondoliers, Utopia Limited. Mr. Trutt donated two display cases to the Library to house a permanent display of his collection of Gilbert and Sullivan opera related ceramic figurines. 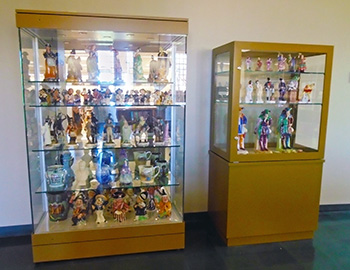 The display cases contain an extensive display of figurines and related items. These range from the 1890’s through the twentieth century and up to the present day. The five shelf display case was procured in 2011. As the collection grew the three shelf display case was added in 2015. The display cases are located at the western end of the second floor opposite the Robert and Maureen Gohstand Reading Room. The picture shows a front view of the three shelf display case. The middle shelf from left to right are Mikado, Peep Bo, Yum Yum from The Mikado; Pirate King, Policeman from Pirates of Penzance; Judge from Trial by Jury; Jack Point standing in front of another Jack Point looking sideways. The top shelf from left to right are Ko Ko, Yum Yum, Ko Ko, Yum Yum from The Mikado; Elsie Maynard, Jack Point, Elsie Maynard form Yeomen of the Guard. Off to the left is the five shelf display case. A sharp eye can detect the Three Maids from The Mikado on the center shelf. Royal Doulton items are sprinkled throughout the collection and represent the “collaboration” between England’s most famous opera duo and England’s most famous Pottery. Also of note are the series of Gilbert & Sullivan characters produced by the English company, Shorter and Sons, in the 1960’s. They were made in two sizes, shown in the five shelf case, with all fourteen of the smaller size of the series and nine of the larger size. There is a 1996 set of three former D’Oyly Carte actors which was commissioned by the director of the newly established Gilbert & Sullivan Festival. This annual three week Gilbert & Sullivan Festival, formerly held in Buxton, England, has moved to Harrogate.