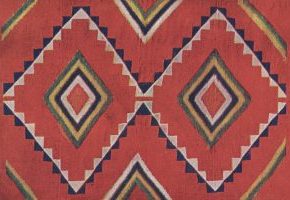 Posted in display, and outreach

The CSUN University Library invites you to join us in honoring Native American Heritage Month this November. Below, you will find a selection of eBooks and films freely available through the Library that explore and reflect upon the history and contemporary experiences of First Nations people, and celebrate their rich cultures and traditions. For even more books uplifting Indigenous voices and experiences, be sure to visit our book display in the Library’s First Floor Learning Commons.

The California State University, Northridge University Library recognizes and acknowledges the Sesevitam, the first people of this ancestral and unceded territory of Sesevenga that is now occupied by our institution; and it honors their elders, past and present, and the Sesevitam descendants who are citizens of the Fernandeño Tataviam Band of Mission Indians. The Library recognizes that the Sesevitam are still here and it is committed to lifting up their stories, culture, and community. 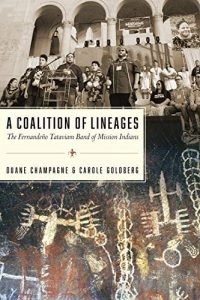 A Coalition of Lineages: The Fernandeño Tataviam Band of Mission Indians (2021)

By Duane Champagne and Carole Goldberg

“The Fernandeño Tataviam Band of California Mission Indians have lived in Southern California in the area now known as Los Angeles and Ventura Counties from time immemorial. Throughout history, these Indigenous Californians faced major challenges as colonizers moved in to harvest the resources of the California lands. Through meticulous archival research, authors Duane Champagne and Carole Goldberg trace the history of the Fernandeño Tataviam Band from the time before the Spanish arrived in the Americas to the present day.” 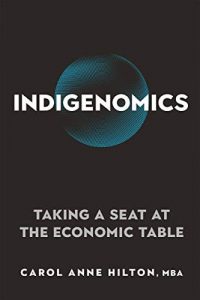 Indigenomics: Taking a Seat at the Economic Table (2021)

“It is time. It is time to increase the visibility, role, and responsibility of the emerging modern Indigenous economy and the people involved. This is the foundation for economic reconciliation. This is Indigenomics. Indigenomics lays out the tenets of the emerging Indigenous economy, built around relationships, multigenerational stewardship of resources, and care for all […] Indigenomics calls for a new model of development, one that advances Indigenous self-determination, collective well-being, and reconciliation. This is vital reading for business leaders and entrepreneurs, Indigenous organizations and nations, governments and policymakers, and economists.” 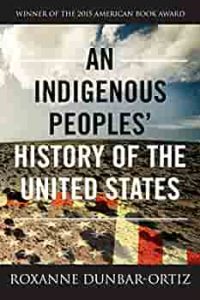 An Indigenous Peoples’ History of the United States (2014)

“Today in the United States, there are more than five hundred federally recognized Indigenous nations comprising nearly three million people, descendants of the fifteen million Native people who once inhabited this land. The centuries-long genocidal program of the US settler-colonial regimen has largely been omitted from history. Now, for the first time, acclaimed historian and activist Roxanne Dunbar-Ortizoffers a history of the United States told from the perspective of Indigenous peoples and reveals how Native Americans, for centuries, actively resisted expansion of the US empire.” 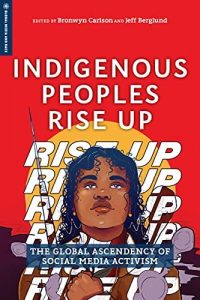 “Indigenous Peoples Rise Up: The Global Ascendency of Social Media Activism illustrates the impact of social media in expanding the nature of Indigenous communities and social movements. Social media has bridged distance, time, and nation states to mobilize Indigenous peoples to build coalitions across the globe and to stand in solidarity with one another. These movements have succeeded and gained momentum and traction precisely because of the strategic use of social media. Social media—Twitter and Facebook in particular—has also served as a platform for fostering health, well-being, and resilience, recognizing Indigenous strength and talent, and sustaining and transforming cultural practices when great distances divide members of the same community.” 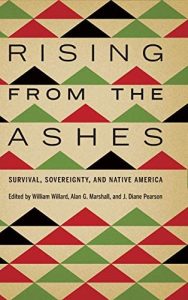 Rising From the Ashes : Survival, Sovereignty, and Native America (2020)

“Rising from the Ashes explores continuing Native American political, social, and cultural survival and resilience with a focus on the life of Numiipuu (Nez Perce) anthropologist Archie M. Phinney. He lived through tumultuous times as the Bureau of Indian Affairs implemented the Indian Reorganization Act, and he built a successful career as an indigenous nationalist, promoting strong, independent American Indian nations. Rising from the Ashes analyzes concepts of indigenous nationalism and notions of American Indian citizenship before and after tribes found themselves within the boundaries of the United States. “ 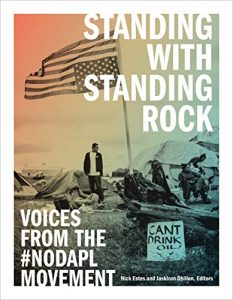 Standing with Standing Rock: Voices From the #NoDAPL Movement (2019)

“Amid the Standing Rock movement to protect the land and the water that millions depend on for life, the Oceti Sakowin (the Dakota, Nakota, and Lakota people) reunited. Through poetry and prose, essays, photography, interviews, and polemical interventions, the contributors reflect on Indigenous history and politics and on the movement’s significance. Their work challenges our understanding of colonial history not simply as “lessons learned” but as essential guideposts for activism.” 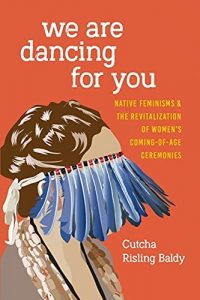 We Are Dancing for You: Native Feminisms and the Revitalization of Women’s Coming-of-Age Ceremonies (2018)

“‘I am here. You will never be alone. We are dancing for you.’ So begins Cutcha Risling Baldy’s deeply personal account of the revitalization of the women’s coming-of-age ceremony for the Hoopa Valley Tribe. At the end of the twentieth century, the tribe’s Flower Dance had not been fully practiced for decades. The women of the tribe, recognizing the critical importance of the tradition, undertook its revitalization using the memories of elders and medicine women and details found in museum archives, anthropological records, and oral histories.” 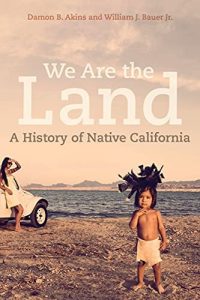 We Are the Land: A History of Native California (2021)

By Damon B. Akins and William J. Bauer Jr.

“Before there was such a thing as “California,” there were the People and the Land. Manifest Destiny, the Gold Rush, and settler colonial society drew maps, displaced Indigenous People, and reshaped the land, but they did not make California. Rather, the lives and legacies of the people native to the land shaped the creation of California. We Are the Land is the first and most comprehensive text of its kind, centering the long history of California around the lives and legacies of the Indigenous people who shaped it. “ 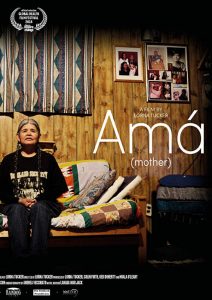 “Amá tells an important and untold story: the abuses committed against Native American women by the US Government during the 1960s and 70s. The women were removed from their families and sent to boarding schools. They were subjected to forced relocation away from their traditional lands and, perhaps worst of all, they were subjected to involuntary sterilization.” 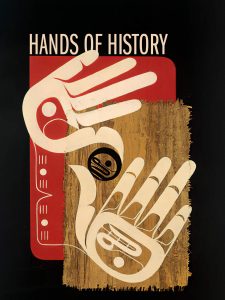 “This documentary follows four female First Nations artists – Doreen Jensen, Rena Point Bolton, Jane Ash Poitras and Joane Cardinal-Schubert – who seek to find a continuum from traditional to contemporary forms of expression. These exceptional artists reveal their aesthetic philosophies, their techniques and personal styles, and the exaltation they feel when they are immersed in the act of creation. This film is a moving testimony to the role that female Aboriginal artists have played in maintaining the voice of Aboriginal culture.” 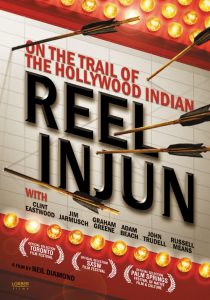 Reel Injun: On the Trail of the Hollywood Indian (2010)

“Cree filmmaker Neil Diamond takes a look at the Hollywood Indian, exploring the portrayal of North American Natives through a century of cinema. Traveling through the heartland of America, and into the Canadian North, Diamond looks at how the myth of ‘the Injun’ has influenced the world’s understanding — and misunderstanding — of Natives. Reel Injun traces the evolution of cinema’s depiction of Native people from the silent film era to today, with clips from hundreds of classic and recent Hollywood movies, and candid interviews with celebrated Native and non-Native film celebrities, activists, film critics, and historians… It’s a loving look at cinema through the eyes of the people who appeared in its very first flickering images and have survived to tell their stories their own way.” 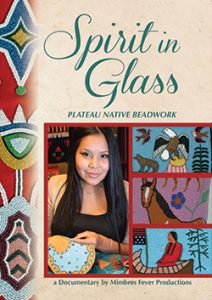 “Celebrate the spectacular beadwork and culture of the Columbia River Plateau People through the eyes and hearts of the artists. Together, they share their history, motivation and the beadwork that plays and important role in binding their culture together. Native Plateau beadwork and culture is unique and its story of survival is a part of the rich tapestry of America. Narrated by Nez Perce storyteller Nakia Williamson, Spirit in Glass: Plateau Native Beadwork features artists from the Warm Springs, Yakama, and Umatilla Reservations.” 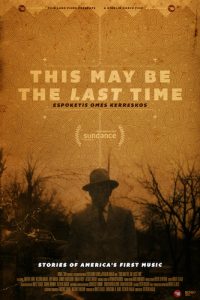 “This May Be the Last Time traces the heartfelt journey of award-winning filmmaker Sterlin Harjo as he interweaves the tale of a mysterious death in 1962 with the rich history of the powerful hymns that have united Native American communities in times of worship, joy, tragedy, and hope. Investigating the stories of these songs, this illuminating film takes us on an epic tour as we travel with the power of the music through Southwest America, slavery in the deep South, and as far away as the Scottish Highlands.” 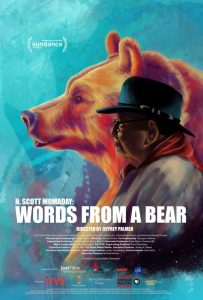 “Words from a Bear examines the enigmatic life and mind of Pulitzer Prize-winning writer Navarro Scott Momaday, one of Native America’s most celebrated authors of poetry and prose. Words from a Bear visually captures the essence of Momaday’s writings, relating each written line to his unique American experience representing ancestry, place, and oral history… Although his unique heritage is a central theme, Momaday’s work asks the questions every audience can relate to: what are our origins and how do we connect to them through our collective memories? Through his literature and the cinematic visuals, Words from a Bear illuminates how Momaday has grappled with these basic questions of human existence and his own identity.”