These days, CSUN Emeritus Librarian Kris Ecklund lives far away from the San Fernando Valley. Her current house sits on a hill in Sequim, a small city perched on a bay in Northern Washington State just across the water from Canada. Even with all those miles between the Oviatt Library and her current home, Ecklund has never forgotten the place where she spent more than thirty years doing the work that she loved so much.

Ecklund's career at CSUN began in 1971 when she was hired as a temporary Humanities Librarian working in what was then called the Technical Services Department. Later, she was hired into a tenure track position in the Reference Department, which back then was still located in the campus’ South Library. Over the years she worked as the subject specialist for Religious Studies, Philosophy, and several modern Languages, as well as serving for a time as Reference Collection Coordinator. Ecklund remembers that during her early tenure, typewriters were acquired only for clerks and cataloging librarians. The lack of equipment back then impeded the delivery of printed library guides and other instructional materials. 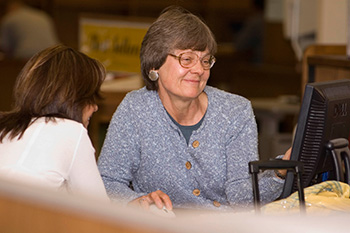 By the mid-1980s, Ecklund was working in a new assignment as Library Instruction Coordinator. "There still was no regular equipment budget," she says, and in 1985 Ecklund purchased a home computer. Her newly acquired Macintosh greatly helped in the production of instructional materials. “The Northridge Earthquake in February 1994 catapulted the Library into the Internet Age,” says Ecklund. “Online resources were evaluated and integrated, and hardcopy acquisitions began to slow.”

After her retirement in 2008, Ecklund established an endowment to sponsor a librarian internship in the Oviatt’s Research, Information, and Outreach Services Department (RIOS). The Kris Ecklund Endowment funds a semester-long, paid position for a library school student or recent MLIS graduate. The internship attracts library school students from across the country, and offers them an opportunity to work alongside Oviatt Library faculty at the reference desk, in the classroom, and while doing electronic reference service work. Acting Chair of the RIOS Department Kathy Dabbour finds working with the interns personally rewarding and beneficial to future librarians. “I’m happy that the Ecklund Endowment makes it possible to compensate the interns, so that they are able to work on a professional level,” says Dabbour.

Ecklund says that the idea for the endowment came to her as a way to honor the good fortune of having been able to spend her working life in a career that she loved, and one to which she is still deeply committed.  She was also inspired to do something that would support young people, much like she had been helped by a legacy from her grandmother. "Paying it forwards and paying it backwards at the same time – what a way to honor CSUN's librarians who've given their best for decades,” says Ecklund. In addition to advocating for her own endowment, Ecklund is also an enthusiastic supporter of the recent, anonymously established CSUN Librarians Legacy Endowment. When fully funded, this new endowment will support a second paid internship; this one for Collection, Access and Management Services (CAMS). Ecklund is quick to point out that the ability to offer internship stipends through these endowments not only helps the Oviatt attract more high-quality intern applicants, but also helps to provide graduate students with desperately needed financial support while they complete their library school studies.

Ecklund recalls being among a small group of librarians who started work at the Oviatt in the 1970's who were part of the new generation of librarians. There is no doubt that the scope of librarianship has and continues to evolve. Now, as she sits on her veranda listening to the birds and watching the sun set over the Strait of Juan de Fuca, Ecklund can take great pride in the fact that she continues to play a vital role in the ongoing stewardship of a life-long profession that she holds so dear.