“This project honors and highlights individuals who have fought for social justice and often suffered from severe repression and other consequences. For some of our interviewees, it is the first time they’ve publicly spoken about their story. I feel very honored,” shared Dr. Stanford.

In two separate interviews with Watani Stiner, former member of the US Organization, he discusses his family’s relocation from Houston to Watts, California as a young child, and how his Catholic beliefs and humble life was shaken by school bullies and fighting. Stiner shares details about becoming involved in the Gladiators neighborhood club and the US Organization led by Professor Maulana Karenga. He also discusses the UCLA campus shooting in 1969, where he was convicted for the killing of Black Panthers Alprentice “Bunchy” Carter and John Huggins, though he never fired a bullet. 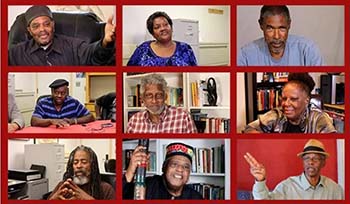 In another oral history interview, Bird and Kumasi, both members of the neighborhood club “Slausons,” discuss street club cultures of the 1940s, 50s, and 60s and their relationship to the Black Power Movement.

Also featured in the oral history collection is Kicheko Davis, former member of the US Organization, who discusses her leadership role in the organization and how they created the internationally celebrated Kwanzaa holiday in Los Angeles.

In Dr. Stanford’s “Fieldwork in the African-American Community” course, students have the option to choose work on the Bradley Center’s oral histories for assignments. This often results in students sharing the newly learned histories with family and friends, creating heightened awareness of yesterday’s struggles that still exist today. In a program called the Black Power Hour, featured speakers are invited into the classroom to hear a truncated oral history and participate in a discussion with the invited activist. “Students are learning about bravery, stamina, and the ability to fight for basic human rights they should have had at birth,” says Dr. Stanford.

Keith Rice also makes appearances in classrooms with work study students to share the Bradley Center’s projects, where the audience is very receptive. “Students are very interested and intrigued,” he shared.

The team is committed to expanding the Black Power Archives Oral History Project. Ten additional activists are currently in the queue. “Black Lives Matter opened up the opportunity for us to be more intentional with our archives,” stated Dr. Stanford. There is also interest from the creative community, which opens the door to greater visibility and possibilities.