Vern Bullough and his wife Bonnie met in high school in Salt Lake City, Utah, and were married barely out of their teens. The Bulloughs were together for nearly 50 years and had four children. In 1967, when Vern and Bonnie were in Egypt as Fulbright professors, their oldest son David was killed in what Vern always described as an act of terrorism. 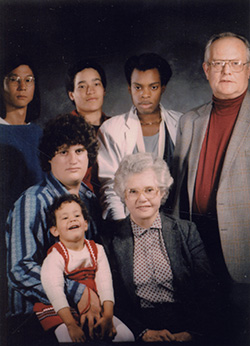 By the time the Bulloughs arrived in Northridge, they had developed a professional interest in the sociology and history of human sexuality.  According to Vern, his fascination in the subject resulted from meeting Bonnie’s mother, a lesbian who had shocked her Mormon society by abandoning her family to move in with a female partner. In a 2003 interview in GayToday.com, Vern said that when he met Bonnie’s mother he was “more or less goggled-eyed and asked all kinds of questions about homosexuality.” From this meeting came a lifetime of research. The result was Vern’s collaboration with Bonnie on two dozen books, with subjects ranging from nursing care to contraception, to prostitution. On his own, Vern wrote another 30 books on human sexuality, and the two researchers amassed a comprehensive library of books and other resource materials on these subjects.

This is where the library’s luck comes in. In 1973, the Bulloughs’ collection was acquired by the CSUN library, to form the nucleus of the Vern and Bonnie Bullough Collection on Sex and Gender. Although they had been affiliated with other universities, including UCLA and the University of Chicago, the Bulloughs chose CSUN as the home for their collection. The choice of CSUN may have been due to the courage of then head librarian Norman Tanis. Tanis was a strong believer in the acquisition of special collections and archives to create a great university library, and he was not intimidated by the possible controversy that might result from incorporating such a provocative collection into the Library’s holdings.

As a result, this treasure trove on human sexuality, which includes more than 8,000 items (an accumulation rivaled only by the Kinsey Collection at the University of Indiana), found its home in Northridge.  Included in the Bullough archive are scholarly treatises on human sexuality alongside colorful art books such as The Clouds and the Rain: the Art of Love in China, which features gorgeous Chinese erotic paintings. The diverse collection even includes naughty paperback books that might have been sold in a clandestine backroom in decades past. Also particularly important are the papers of Virginia Prince, an early transgender researcher and activist. Included in the Prince materials are the records of Tri-Ess, the society she founded as an educational, support, and social group for heterosexual cross-dressers. The Bullough Collection also contains early issues of gay and lesbian periodicals like ONE and The Ladder, both dating from the 1950s. 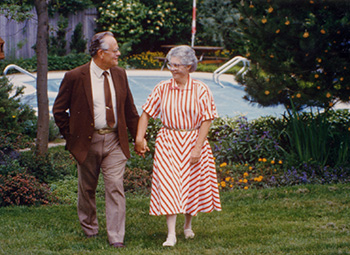 After Bonnie’s death in 1996, Vern established in her honor the Vern and Bonnie Bullough Endowment for Human Sexuality and Gender Studies at the CSUN Oviatt Library.  The primary objective of the endowment is to support programs and exhibitions featuring speakers on the topics of human sexuality and gender issues.  The library partners with the Pride Center, the Queer Studies Program, and the Department of Gender and Women’s Studies on programs and exhibitions. For example, the recent Sex in the Library event was a four-day long series of talks and presentations. In connection with Sex in the Library, two students who demonstrated the thoughtful integration of Bullough Collection resources into their capstone projects were awarded scholarships funded by the endowment. The first two recipients of Bullough Scholarships were Skylar Grogan, from the the Department of Gender and Women Studies, and Orion Block, from the Queer Studies Program.  Vern and Bonnie would be enormously proud of Skylar and Orion, and of all the students who are continuing to conduct research in these important fields.

A few years after Bonnie’s death, Vern Bullough married retired CSUN professor Gwen Brewer, and they enjoyed traveling together until Vern’s death at age 77 in 2006. The Bulloughs continued to contribute to the collection during their lives, and additional materials on the subject of Sex and Gender are still being added today. The Bulloughs’ rich legacy lives on at CSUN in the magnificent Vern and Bonnie Bullough Collection, and with the Vern and Bonnie Bullough Endowment. The books they wrote, alone and in collaboration with each other, include: Sexual Variance in Society and History (which Vern considered his most important work); Homosexuality: a History; Cross Dressing, Sex and Gender; Before Stonewall: Activists for Gay and Lesbian Rights in Historical Context; Nursing: a Historical Bibliography among many others. These titles are a small representation of the major contributions the Bulloughs made in their fields of study, and only a few of the many lasting examples of their impactful and groundbreaking work.