CSUN Librarian Emeritus Virginia Elwood-Akers says that she likes people to know that she is a second-generation Los Angeleno, “Which is fairly rare in people of my generation” says Elwood-Akers. Her father was born downtown, in 1899, near where her great-grandfather ran a settlement house. “My great-grandfather came to L.A. in 1889, so I have very deep roots in Los Angeles,” she says. 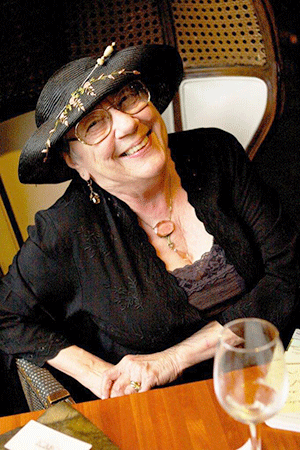 After growing up in Echo Park, Elwood-Akers earned her Bachelor of Arts Degree from the University of California, Los Angeles (UCLA). She later went on to library school at the University of Oregon in Eugene and received her Master of Library Science in 1972. Originally she planned to stay in Oregon, but while visiting family in Los Angeles Elwood-Akers interviewed and was subsequently hired by then CSUN Library Director Norman Tanis. “The Library was looking for someone with a background in Public Relations, which I had done at UCLA in the Long-Range Development Office. They were also starting a friends' group -- the Bibliographic Society -- and wanted a newsletter, brochures, and press releases, etc. And there I was, knowing how to do all that,” she says.

Elwood-Akers started work as a Reference Librarian in August of 1972. “When I was hired we were in two sites, the old Library building, and an off-campus site on Balboa Boulevard for Technical Services,” she says. Not long after Elwood-Akers started work, however, the core of the Oviatt Library building opened and most Library departments moved to the new, larger, central location. Over the years, work in the CSUN Libraries offered Elwood-Akers a variety of opportunities and she was always excited to take up a new challenge and to expand her areas of expertise. “Shortly after I started working at CSUN, Norman asked me if I was interested in history and I said yes, so he said ‘Good, then you are the University Archivist.’” Elwood-Akers freely admits that at the time she was unfamiliar with the role of a Library Archivist, but she was eager to learn and gathered valuable knowledge from workshops offered by the then newly formed Society of California Archivists.

Elwood-Akers remained in charge of the University Archives as her Librarian career continued to evolve. “Norman also said to me, you're a feminist, aren't you? And when I said, ‘Yes, of course’ – which wasn't a popular answer in 1972, I might add – he said, ‘Good, then you are now the Women Studies Specialist.’ And that is how I became a specialist in women's history.” Elwood-Akers is quick to add that she has long been a vocal supporter of women’s rights. “I was a loud and annoying advocate for women's rights on campus. When I started, the highest ranking woman on campus was the Associate Librarian, whose name was Joie Mitchell. I belonged to a group called California Women in Higher Education, which fought for change,” she says. Indeed by the time that Elwood-Akers retired in 2001, the campus had seen a succession of three women serving as CSUN University President. Undoubtedly, the presence of a boisterous self-proclaimed feminist like Elwood-Akers on campus helped to change the perception of what was possible.

She continued to work on some Oviatt Library projects after her retirement; most notably she helped to inventory the vast Vern and Bonnie Bullough Collection on Sex and Gender in Special Collections and Archives. Elwood-Akers never lost interest in the vital work of CSUN’s Special Collections and Archives and has since set up the Virginia Elwood Endowment. Funds generated from this endowment help to support the cataloguing and preservation of papers, photographs and other CSUN and San Fernando Valley State College artifacts. She is also a big believer in supporting scholarships. “In fact, my library degree would not have been possible without scholarships and other financial aid. I also worked at least 30 hours a week while obtaining my degrees, and I know how hard it can be for students without financial resources,” Elwood-Akers says. She established a scholarship in CSUN’s Journalism Department in honor of her late husband, Roy Akers, who was a magazine publisher and editor. She also contributes annually to the Oviatt’s Student Employee Scholarships. “I think that giving money to people who are trying to get an education is the best thing that people can do with their money,” she says.

Elwood-Akers is also a published author. Women War Correspondents in the Vietnam War, 1961 – 1975 came from her work on her Master's Thesis in Mass Communication, which she earned here at CSUN in 1981. Her next book, Caroline Severance, resulted from a request to write a chapter for a proposed book on California Woman Suffragists. That book was never written, but Elwood-Akers began researching Caroline Severance at the Huntington Library in about 1992. Early in her research, she came upon a letter in which Severance wrote to a Mr. Smith suggesting that he might want to help a Los Angeles street preacher who ran a settlement house downtown. Severance wrote, "I think when you talk to Mr. Hewes you will find that he is doing good work with the poor."  Elwood-Akers says that when she read that passage in the letter she nearly fainted. “Mr. Hewes of the Neighborhood Settlement downtown was my great-grandfather. So then I became convinced that Caroline Severance was telling me to write this book.” She is currently also working on a third book, which will be on the subject of single women on the American western frontier. “At the rate my books come out, I suppose I will finish this one at about the age of 92.”

Clearly Elwood-Akers knows how to keep busy. In addition to her own writing, she is a frequent contributor to this newsletter, attends a myriad of events near her downtown home, and is currently serving on a reunion committee for the John Marshall Los Angeles High School class of 1955. She eats out every night, and also loves to travel – especially by train. “I got rid of my car within three years of moving downtown, because I am one block from the subway – and therefore the train station, and therefore the entire United States,” says Elwood-Akers. We wish her safe and exciting travels, but are comforted to know that she will always return to her home here in Los Angeles. Most importantly, we would like to say thank you to this uniquely talented and generous Librarian Emeritus, who will forever hold a special place in our Library’s legacy and in the heart of the CSUN community.