Michael Barrett was born in Bakersfield, California, where he was raised on his family’s farm. After high school, he began his path into higher education close to home at Bakersfield College. Michael was the first in his family to attend college, and worked as a student assistant in the school’s library while majoring in history and political science. Having been a member of the Navy Reserve, Michael began active duty after graduation and served as a radar man all over the western Pacific Ocean. 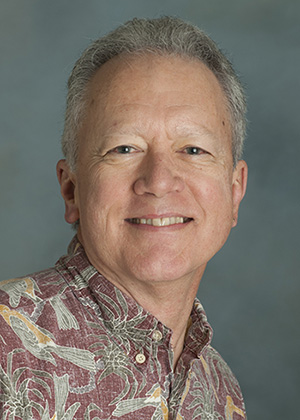 Eventually Michael applied to the USC Library Science School, where he was accepted with a full scholarship. At USC, Michael again worked in the library on campus while managing to complete his degree in just a year and a half. He graduated in 1972, finishing finals at USC on a Friday and starting work at CSUN as an assistant librarian on the following Monday.

Michael’s long and highly admirable tenure at CSUN includes an impressive list of accomplishments, honors, and appointments. He served as chair of the Oviatt Library’s Reference and Instructional Services Department (now Research, Instruction, and Outreach Services); he served on three different WASC accreditation committees; he was a member of the Faculty Senate; and he served as Faculty Senate Secretary four times.  In addition, Michael chaired the Educational Resource Committee, worked on the advisory board for the Student Recreation Center, served on the Honors Convocation Commencement Committee, and was asked to serve on President Harrison’s transition team.

It takes a bit of pressing to get Michael to recount, or for that matter remember, many of the committees that he has either volunteered for or been appointed to over the years. On the other hand, when asked about what it is that has kept him at CSUN through 40 years of orientations, commencements, administration changes, seismic destruction, relocations, computerization, rebuilding, and unyielding technological transformation, Michael responds without hesitation. “Love for the students,” he says.  Michael explains that many of the people he has had the pleasure to assist over the years have also been the first in their family to pursue a college education.

Michael currently is participating in the Faculty Early Retirement Program (FERP), which allows him to work half time while easing into full retirement. A recipient of a Certificate of Ministerial Studies from the Pacific School of Religion, Michael also was recognized by AIDS Project Los Angeles (APLA) as their Volunteer of the Year in 1988. In addition to working in the APLA food bank, Michael personally has raised an estimated $45,000 by participating in 28 walk-a-thons for the organization over the years.

In every way, Michael is a brilliant example of just what makes our CSUN community shine so brightly, and the Library takes great pride in counting him as a very special member of the Oviatt family.