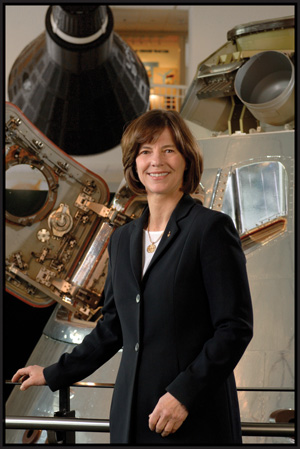 Dr. Bonnie J. Dunbar recently retired as the President and CEO of the Museum of Flight to assume the position of Executive Director of Wings Over Washington, an affiliate organization of The Museum of Flight in Seattle Washington. The “MOF” is the largest private air and space museum in the world, with an education program that provides for more than 100,000 students per year. Wings Over Washington is dedicated to future development of the Museum, including building a new Space Gallery, to acquiring Space Artifacts, including a retiring Space Shuttle, and to building the Aviation High School. Dr. Dunbar retired from the NASA Johnson Space Center in 2005 where she had a 27 year career as a Space Flight Controller, an Astronaut, and a member of the Senior Executive Service.

As a NASA Mission Specialist astronaut and veteran of 5 space flights, Dr. Dunbar logged more than 50 days in space. She has served as the Payload Commander on two flights, including the first Space Shuttle docking mission to the Russian Space Station Mir. Following her flight career, Dr. Dunbar served in the government Senior Executive Service for 7 years, holding various management positions at the NASA Headquarters in Washington, D.C., and at the NASA Johnson Space Center.

Dr. Dunbar holds BS and MS degrees in Ceramic Engineering from the University of Washington, and a PhD in Mechanical/Biomedical Engineering from the University of Houston. She graduated from the Harvard School for Senior Managers in Government in 2001. Prior to working for NASA, she was a senior research engineer with Rockwell International Space Division, where she helped to develop the equipment and processes for manufacturing the thermal protection system for the Space Shuttle. Dr. Dunbar is a member of the American Ceramic Society (Fellow), the National Institute of Ceramic Engineers, the Society of Women Engineers and the American Institute of Aeronautics and Astronautics (AIAA/Fellow). She has been awarded the NASA Space Flight Medal, the NASA Exceptional Leadership Medal, and the NASA Distinguished Service Medal. She was named a Woman of Influence by the Puget Sound Business Journal and has received the Washington State Medal of Merit. Dr. Dunbar holds seven honorary degrees, is a registered Professional Engineer, a member of the Royal Society of Edinburgh, a member of the Royal Aeronautical Society, and in 2002 was elected to the National Academy of Engineers.