A Rare and Generous Gift 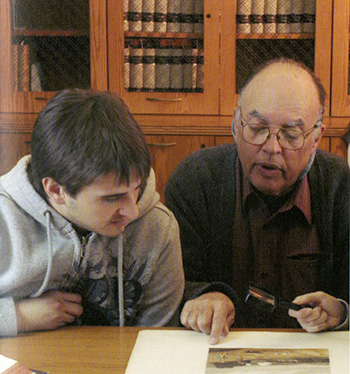 Tony Gardner is a man who admires printing.  He has nothing against modern offset printing, or even laser printing, but what he admires most is hand-set printing dated prior to the middle of the nineteenth century; when type was set by hand, one letter at a time, and printed on a letterpress.  Gardner also has great respect for the CSUN libraries, where he spent a career of over thirty years as a librarian. For many of those years he was the Special Collections librarian, overseeing a collection which includes many examples of fine printing.  These interests are what led him to set up a $100,000 endowment for the purchase of materials created prior to the 1820’s for The Oviatt Library’s Special Collections and Archives.

“I always enjoyed lecturing on the rare books, prints and artists books in Special Collections,” says Gardner. “CSUN students were amazed to learn not only that the Library owned these items, but that they could hold in their hands examples of early printing technology, rare editions and prints, unusual bindings hundreds of years old, and books created purely as art.”

It was in the middle of the nineteenth century that modern inventions such as the steam-powered rotary printing press and the linotype machine, which can create an entire line of type at one time, revolutionized the field of printing.  Although sometimes type continued to be set by hand, modern technologies have tended to relegate this kind of printing to so-called “fine presses,” which create materials that are works of art rather than being merely functional.

These unique materials are also a valuable resource for student and faculty research and study, as well as enriching Library exhibitions. “The Library generally depends on donations for these types of materials, and often these items are not available on the antiquarian book market,” Gardner says. Special Collections and Archives head Ellen Jarosz is quick to cite the value of gifts like Gardner’s. “Endowments like the one Tony created are important in large part because they help us grow and enrich our collections in a consistent, steady, and permanent manner. This means that we are able to continue supporting student learning and research on campus in many different budget environments,” says Jarosz. “The materials we acquire with funds from the Gardner Endowment will support the development of our students' critical analysis skills by engaging them in considering, interpreting, and synthesizing information in these unique resources.” 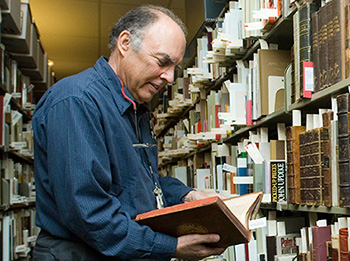 Gardner has a very long history with CSUN. He graduated from the college in 1969, when the campus was still called San Fernando Valley State. He earned a Master of Arts in Oriental/Middle Eastern Studies from the University of Arizona, and later went on to obtain his MLS from UCLA. Gardner began his career in the CSUN libraries in 1974. His tenure as Special Collections librarian at CSUN led to his involvement in LA as Subject, a research alliance dedicated to the preservation of Los Angeles history; LAPNET (Los Angeles Preservation Network) where librarians and other interested parties share problems and solutions regarding the preservation of printed materials; the Faces of L.A. Project; and LA Culture Net.

Clearly retirement has done little to slow him down, or to dull his passion for the conservation of rare materials. Gardner and his wife, a retired University of California professor Nancy Gallagher, are the parents of two college student daughters, Lisa and Karina.  With their nest empty, the couple spent two years in Egypt where Gallagher was the Director of the UC Education Abroad Program for the Middle East. The Program was based at the American University of Cairo. “During that time, I worked in the Conservation Laboratory in the University's Rare Books and Special Collections Library where I restored late 19th and early 20th century photograph albums,” says Gardner. They left Cairo in November 2013. In August 2014, Gardner taught library skills to refugees at the Jesuit Commons Higher Education Program in Amman, Jordan.

The Tony Gardner Endowment is expected to bring many new examples of early printed books into the Library and to greatly enhance the Oviatt’s already fine holdings in this area.