For the fall semester of 2015, I enrolled in an American Literature, 1860-1912 class. The focus of study for the course was literature written during the U.S.’s Gilded Age; a time of industrialization when many hopeful immigrants flocked to the U.S., only to find themselves suffering great financial hardship at the hands of wealthy business owners. Our professor, Dr. Colleen Tripp, wanted us to understand our nation’s culture and mindset during this era. She also wanted us to discover that literature – the written word – was not the only source that we could analyze to gain a greater understanding of the American mindset of the early 20th century.

One day, my class was instructed to meet in a room at the Oviatt Library where Professor Tripp had arranged with the Head of Special Collections and Archives, Ellen Jarosz, for us to view a variety of primary sources from the early 20th century. We weren’t allowed to touch the fragile items, but we were able to take pictures – with the flash off. We were told that we should take pictures of whatever captured our interest, and from those photographs we were supposed to choose one around which to analyze and construct a thesis. In the following weeks, we would then present our research to the class.

The Special Collection and Archives items we were shown consisted of political cartoons from Puck magazine, sheet music covers, and various scrapbooks from clubs and organizations that were active during the Gilded Age. It was a thrilling experience to examine actual physical materials that uniquely conveyed the individual and collective voices of people who lived during the late 19th and early 20th centuries in the U.S.

I chose to focus my research on a political cartoon titled “The Rising Waters.” The image depicts a man and a woman in torn clothing holding a baby. This family, labeled “the American middle class,” is perched on a boulder barely large enough to hold them. The boulder is labeled “opportunity.” The family is slowly being submerged in a sea of water containing sharks, labeled “centralized wealth,” and in the background the Statue of Liberty is covered up to its chest in water. This particular political cartoon is part of the Puck Cartoons Collection, 1880-1907, and it was donated to the Oviatt Library by Norman E. and Sivia B. Mann, who have made various donations to several institutions across California. The Oviatt’s Special Collections and Archives houses full bound volumes of Puck magazine, but “The Rising Waters” is one of several unbound cartoons.

"It is a refreshing experience for students to get out of the classroom and dissect historical objects for the stories they have to tell."

Special Collections and Archives Coordinator, Holli Teltoe, described for me the meticulous archival processing that artifacts such as these undergo. First, items are assessed for their condition and preservation work is done accordingly, such as smoothing out creases and cleaning. The items are then placed in acid-free containers, or housing, and a listing is added for the item or collection in the Library’s Finding Aid Database. The items may then be featured in “A Peek in the Stacks,” a blog which features a different collection each week. The recurring blog is a good resource for students and researchers to find out about collections that are available to them.

“The Puck Cartoons are good research materials for first time users of Special Collections and Archives,” says Jarosz. “Items such as these political cartoons engage researchers’ curiosity and drive them to perform additional research to better understand the context behind the images.” For this reason, the Puck Cartoons Collection provides favorite examples for Reading Room lectures that introduce students to the resources available to them in Special Collections and Archives.  “It is a refreshing experience for students to get out of the classroom and engage directly with historical objects, uncovering the stories they have to tell,” says Jarosz.

In the end I incorporated a close reading of “The Rising Waters,” into my thesis: that during the early 20th century, the more power and corruption grew the less opportunity and liberty there was for average U.S. residents. Thanks to this donor-gifted resource available through Special Collections and Archives, not only was I able to succeed in one particular class, but more importantly, I significantly improved my general skills as an observer and researcher. 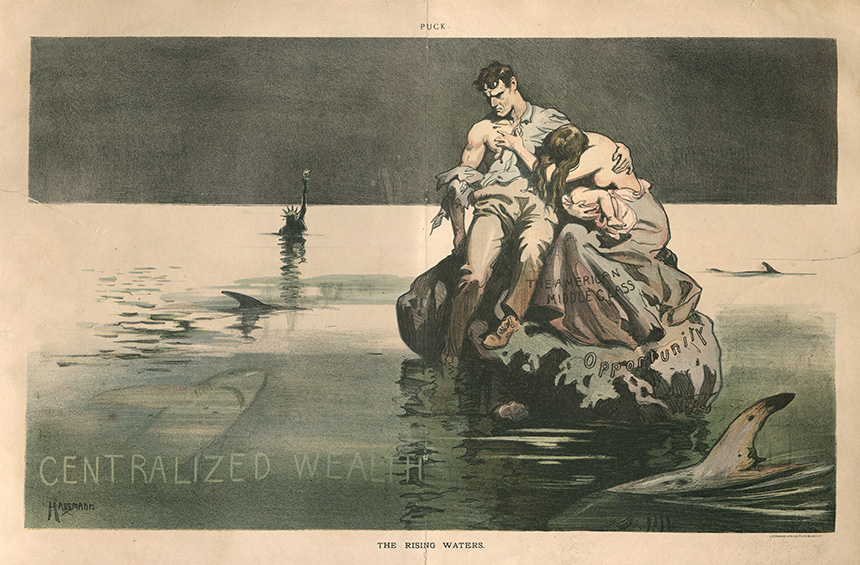