Right of Way: Justice and Equity in the Growth of Los Angeles 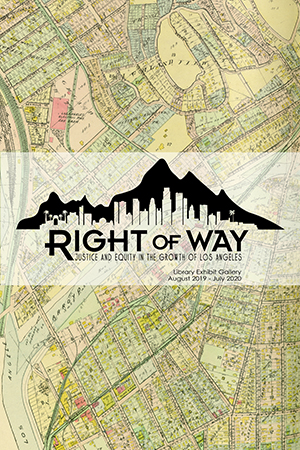 The environmental justice movement sees people of color, people of low socioeconomic status, indigenous peoples, immigrant populations, LGBTQ communities, and other marginalized groups as being disproportionately burdened by the presence and effects of ecologically harmful infrastructures like landfills, factories, and transportation systems. It connects environmental quality objectives to strategies for social justice by centering the harms experienced by human beings rather than viewing people only as inflictors of environmental damage. Thus, environmental justice is acutely fixed to both social justice and protection of natural resources.

As Los Angeles has grown, decisions to site different kinds of infrastructure in various locations around the city and county have had differing levels of impact on local neighborhoods and communities. Environmental justice activists have fought concentrations of environmental problems in marginalized communities, criticized the mainstream environmental movement for ignoring these communities and their problems, and generally worked to combat environmental racism.

We invite you to explore the gallery, and consider the ways historicizing these struggles might help activists and scholars define, comprehend, and amend contemporary environmental inequalities. What are the distinctions between environmental justice and environmental equity, and how might they be leveraged to improve the experiences of marginalized communities? Are variations in environmental harm due to racism, market characteristics, or other social processes that cause injustices indirectly? Do activist strategies that rely on governments and industry via legislation, reforms, and policy concessions ultimately risk reinforcing the legitimacy of oppressive structures?