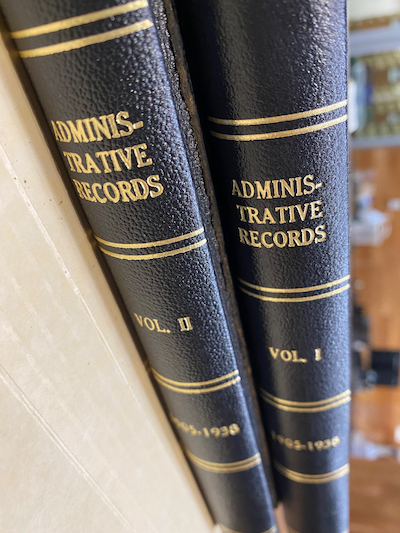 National Weather Service (as it is known today) within the National Oceanic and Atmospheric Administration, Department of Commerce.

Special Collections & Archives holds two collections that document the daily work of the Weather Bureau in Southern California during the early 1900s: the Los Angeles Weather Station Logbooks and the Brawley, California Weather Station Logbook. These are administrative records that document the daily activities of the employees at each station. They do not hold the weather data collected at these sites, but instead, they hold many other fascinating pieces of information including the names and schedules of employees, their daily activities and travel arrangements, earthquake occurrences, new instrument installations, receipts of supplies, and more. All of this logged data give insights into the daily operations of the stations thereby illuminating the inner workings of this particular government bureau.

Some of the notations reflected the stations' participation in the city's expanding infrastructure and experience of local natural disasters. Still in the early days of electricity distribution in the United States, an entry on page 53 in Vol I. of the Los Angeles station logbooks records their involvement in an Electricity Exposition: “Under instructions from the Chief of the Bureau. An exhibit of instruments was installed at the Electrical Exposition held in the Shrine Auditorium Nov. 29 – Dec. 11, 1912.” Earthquakes were also logged at both stations. The Brawley Station made an entry on January 30, 1909 stating, “A distinct shock from earthquake was felt at 2:25 p.m. The shock was attended by sound of rumbling in the mountains west of the valley.” On August 4, 1927 the Los Angeles Station logbook notes: “Earthquake felt- Earthquake 4:24:30 a.m. to about 4:24:45 a.m. intensity about no.5 – Rossi-Forel scale. Onset of shocks rapid, rocking. Believed to have been two shocks. Direction N-S. No sounds.”

Other entries in the logbooks document personnel changes, visits from personnel at nearby stations, and the death of one colleague who was on leave to serve in the military during World War I. The two logbooks even reference each other. Early on, the Brawley log notes a visit from "Mr. A. B. Wollaber," who came to help open up the station and install equipment. Then, on May 2, 1910 the Los Angeles log shows Mr. Brawley departing for the Brawley Station on "official business." 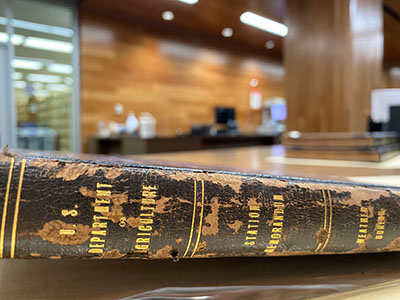 Cross-referencing that with the Brawley log one can see an entry from the following day, May 3, 1910, showing Mr. Brawley arriving to close down the station and “pack instruments and property for shipment”. The Los Angeles station logbook records the death of a colleague after he took a leave of absence to complete service in the Navy. On September 24, 1918 the log states, “Word received at 8 a.m. that David W. Sidey Jr., a quartermaster in the U.S. Navy at San Pedro, was fatally injured about 6:30 a.m. by falling 6 stories down an elevator shaft at the submarine base.”

The activities of station personnel outside the two stations are also sometimes noted in the logbooks. The Los Angeles logbook notes on May 6, 1919, “Official in charge appeared in court dept to testify as to wind direction and velocity in the case of Nelson vs. Kraft.” This highlights that the weather data recorded at these stations had many different uses. There are numerous notations of court appearances throughout both stations' logbooks. Overall, these logbooks provide insights into the Weather Bureau’s operations, how data was collected about Southern California weather, what instruments were used, collaboration between stations, and more. They might also provide helpful information for genealogical research due to the detailed employee information that they hold.