In 1970, the notion of alternative or open schools under the public school system was proposed at the White House Conference on Children, and in 1972 Congress appropriated millions of dollars for cooperative education research. This concept of alternative schools was picked up by the education- and innovation-minded in California under the Los Angeles Unified School District’s wing and arose as a resolution to many educational problems in the state. This proposal coincided with efforts to desegregate schools via busing, as featured in a previous post: School Desegregation and Busing in Los Angeles. In 1975, about eight alternative public schools were operating in the Los Angeles, Santa Monica, and Pasadena Unified School Districts, and this group of schools combined their efforts as the Association of Alternative Public Schools (AAPS) for the advancement of humane alternative education in Southern California. 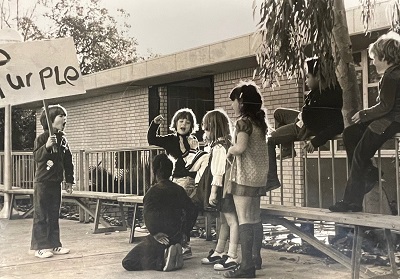 Based on the Blueprint for an Alternative School and Area E’s Student and Parent Agreement Form, Area E’s salient features were a multi-cultural, multi-racial environment; multi-grade level environment in which students from different grades could attend similar classes; a variety of different learning situations (independent/group/class, inside/outside); a self-directed leadership in learning; active participation amongst all members; and student-parent inclusion in any school decision-making process. Students were paired with an advisor of their choice, and grade reports were not issued unless requested.

Records from workshop sessions at the Alternative Schools Conference reiterate the significance of multi-culturalism and shared decision-making, and address topics such as dissecting the language of discrimination and identifying and embracing multicultural influences in daily life. Other topics include burn-out and the significance of the term "Magnet" to a school’s name. 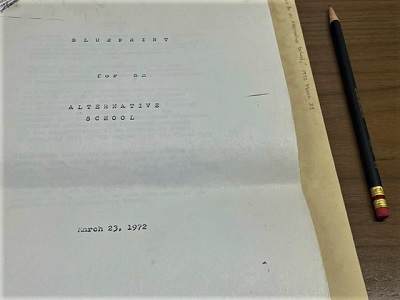 The collection includes copies of Area E's newsletters that contain stories, updates, and issues between students, staff, and parents. One from the Permanent Press dated October 1974 announces the exciting arrival of a new school bus, while meeting minutes from 1981 later describe the failure of home to school bus transportation to increase enrollment and to keep the student population diverse. Another section draws attention to classroom pets like hamsters as well as community giveaways and requests, such as comic books or fabric for the Sewing class. There is also a space for Suggestions and Complaints, which includes the common problem of maintaining a clean school and the communal responsibility behind it. The collection’s black-and-white photographs depict the students leading their way through the school grounds freely and tapping into their curiosity to explore and learn alongside their schoolmates and other community members, such as local policemen and musicians.

The fate of the school after 1981 is less clear. In a report on the status of Alternative Schools, challenges such as sustaining strong cooperation and the exhaustion from the use of the unstructured and natural development approach were noted. In meeting minutes from the early 1980s, a decrease in funding, including the loss of federal aid, was reported. Alternative is no longer displayed as a type of school for LAUSD, and other types such as Charter, Magnet, Gifted/Talented schools, and Options schools are listed. Despite the short-lived nature of Area E, it represents a significant effort from educators, families, and children to embrace integration, cooperation, community, and innovation when segregation and more rigid school structures had been in place prior.