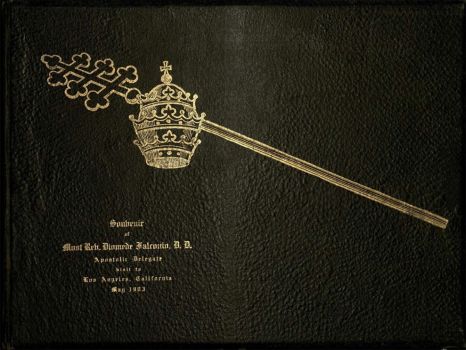 Hidden among the thousands of rare and unique publications in Special Collections and Archives are undiscovered treasures that tell the story of Los Angeles. One of these gems is Visit of His Excellency Most Rev. Diomede Falconio, Apostolic Delegate to the United States. This souvenir book was published to commemorate the dedication of St. Joseph’s Church, one of the most beautiful historical landmarks in Los Angeles, which was destroyed by fire in 1983.

Beginning with the Gold Rush of 1849, hundreds of thousands of immigrants from all over Europe made their way to California in hopes of striking it rich. Of the more than one million Prussians who came to the United States in the 1850s, at least 30, 000 came to California to seek their fortunes. Following Kaiser Wilhelm I's ascension to power in 1861, and the appointment of Otto von Bismarck to Minister President of Prussia, Catholics began to experience increasing religious oppression and many fled to the United States. In 1871, Bismarck began his kulturkampf, which forbade the discussion of politics in sermons, signaling an official repression of the Catholic clergy. Between 1870 and 1880 the number of Germans in Los Angeles had doubled and by 1890, had quadrupled.

Between 1860 and 1870, German immigrants had trickled into Southern California from the north, making their way to Los Angeles to establish farms, start businesses, or work in trades, and roughly four percent of the population in Los Angeles was made up of German-born citizens. By the late nineteenth century, Los Angeles was a lively city, brimming with people from many different ethnic and racial backgrounds, who practiced a myriad of customs and beliefs, and spoke a wide variety of languages. St. Joseph’s Catholic Parish was established in 1889 on Santee Street between 12th and Pico, with the intention of serving all the German-speaking Catholic families in Los Angeles and surrounding vicinities.

As the number of German Catholics in Los Angeles continued 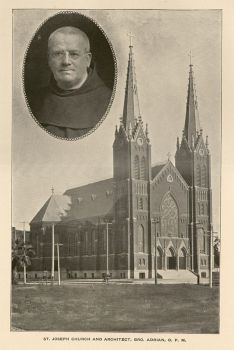 to grow, plans were developed to erect a much larger church that would stand at 218 East 12th Street. Both of Saint Joseph's architects were German Franciscan monks, Brother Adrian Wewer and Brother Leonard Darscheidt, who had previously worked together on church designs. Groundbreaking for the new church commenced in December of 1900, and the corner-stone was laid by His Excellency, Most Reverend Archbishop George Montgomery the following July. After nearly three years of construction, the Church was dedicated on May 3, 1903, on the Feast of St. Joseph, the patron of the Church.

For officiating at this dedication, His Excellency, Most Reverend D. Falconia, apostolic delegate to the United States, came from Washington, D.C., accompanied by Archbishop Montgomery, Most Reverend Bishop Grace of Sacramento, Most Reverend Bishop Peter Verdeguer of Brownsville, TX, and delegates from most of the nine Franciscan houses in the West. Following the dedication ceremony, the visitors were treated to five days of adventure, including numerous public receptions and private banquets, theatrical and musical performances, a trip to the San Gabriels via the Mt. Lowe Railroad, meetings with local politicians, and tours of the local missions.

Over the next eight decades, the population of Los Angeles went through many transitions, and the Church responded by continuing to address the cultural needs of its parishioners. In 1985, two years after fire destroyed the landmark, construction began on the new $1.8 million church that stands in its place today. On Sundays mariachi masses can be heard ringing through the adjacent streets, along with the original church bells designed and created by German tradesmen in long ago Los Angeles.