In the United States, there are nine cities or towns named "Burbank." Though the botanist Luther Burbank is well known in his adopted state of California, the City of Burbank in the San Fernando Valley is named after Dr. David Burbank. He was trained as a dentist on the east coast and migrated to San Francisco in the early 1850s. By the early to mid-1860s, he had established a thriving dental practice in the Los Angeles area, and began to buy up land in the Rancho Verdugo, Rancho Providencia, and Rancho San Rafael areas, where he raised sheep and grew wheat. When the Great Partition of 1871 dissolved the Rancho San Rafael, Burbank was granted full title to all of the land he had accumulated, which was more than 9,000 acres. 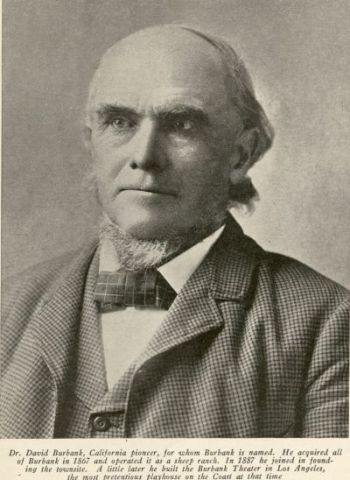 In 1886, Burbank sold his holdings to the Providencia Land, Water, and Development Company for approximately a quarter of a million dollars. Developers then drafted plans for a business district, small farms, and residential lots. The new development was opened on May 8, 1887, and named in honor of Dr. David Burbank. In the 1890s, Burbank devoted his time and capital to commercial interests, building his own theater in Downtown Los Angeles, which opened on November 27, 1893 at 6th and Main. Special Collections and Archives holds two bound volumes of programs from the Burbank Theater, called The Foyer.

If you are interested in the history of Burbank, an especially rich resource is the San Fernando Valley History Digital Library. Partnered with over thirty libraries, museums, churches, archival institutions, historical societies, and even private individuals, the library digitized more than 4,000 photographs and records which document the San Fernando Valley. If one searches for Burbank, the digital library finds nearly 400 images. Each image is accompanied by a detailed description with subject headings that are hyperlinked. An advanced search page provides more options to search other fields such as photographer or date.

Of the 396 images on the digital library about Burbank, a number of the images originate from the Coralie Hewitt Tillack Collection. In 1956, Coralie Hewitt Tillack began her 26-year career with Lockheed Air Terminal in Burbank. She amassed an interesting collection of images of the airport as well as photographs of Howard Hughes, Charles Lindbergh, and Amelia Earhart. One of the more interesting parts of the collection are images taken of the airport under camouflage during World War II. The San Fernando Valley History Digital Library includes ten images of the airport under camouflage. The Army Corps of Engineers covered the airport with painted fabric to simulate a residential setting.

Other collections that include materials on the history of Burbank are Motion Picture Screen Cartoonists Guild, Local 839 Collection, which has a number of images from the 1941 Disney labor strike  and the California Tourism and Promotional Literature Collection, which includes a section on the City of Burbank.