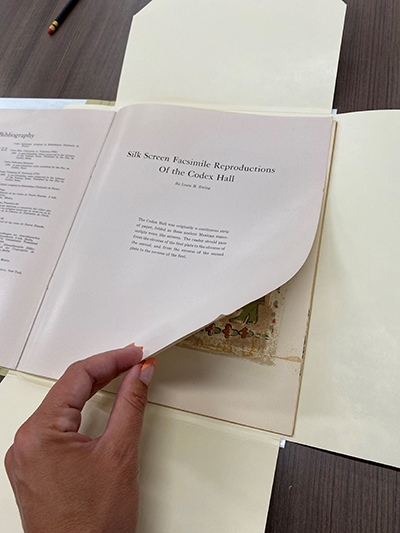 A wide array of materials—papyrus, clay, and bronze, among others—have been used to preserve information. The codex, a Eurasian method of storing data dating back to at least the first century CE, was made of animal skins or plant matter; the sheets were bound along one edge, much like a modern book.

Indigenous cultures of Mexico also had methods of preserving written information, as the Spanish discovered when they conquered the Aztecs in 1522. These documents were also called codices by the Spanish, despite the differences between the Eurasian and American traditions. Many indigenous codices, for example, consisted of a single long sheet, like a scroll, but which had accordion folds, unlike a scroll. These Aztec codices used paper made from the bark of a species of fig, called amatl in Nahuatl.

We cannot know how many copies of a given codex were created, though we do know they required much labor to produce. Since there is usually only one surviving example of original codices, many special collections departments have facsimiles of these codices in their collections. This is the case for our copy of the Codex Hall. Facsimiles allow researchers to reach tentative conclusions about a given artifact, even if they cannot see the original. This is especially important in the case of codices which have been lost or destroyed, as is the case here—the original codex is no longer held by The Philosophical Research Society of Los Angeles, founded by occultist Manly P. Hall, and no one at that institution knows its current location. While this raises questions around the authenticity of the original item and the accuracy of the facsimile copy, it also means the facsimile itself is now the only way to consult the content it presents.

Most of the Aztec codices known to us are not in Mexico but rather in Europe, where they were taken by Spanish and other European colonizers. Codex Hall, in contrast, is in the United States, having been brought here from Mexico in the late nineteenth century by an unknown collector. Hall then acquired it sometime before 1947, when this facsimile was published.

The Codex Hall also differs from most Aztec codices in having been painted not on amatl paper but rather paper made from the leaves of the maguey, which is a species of agave. Maguey paper is less durable than amatl, leading some scholars to believe that this artifact was created in the nineteenth century. 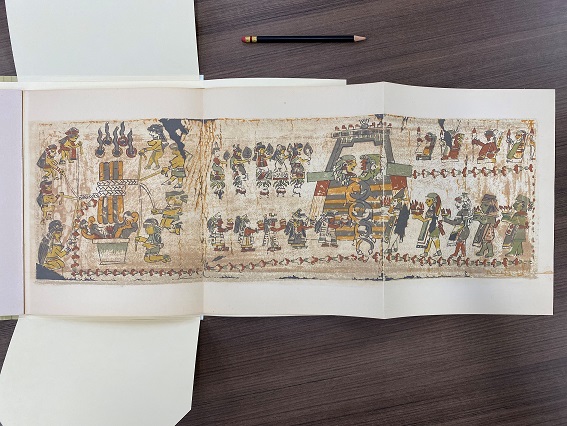 In part because we don't know the provenance of this work, it is difficult to determine if it was created shortly after the Conquest, or much later. Anthropologist Charles Dibble, who wrote the commentary on the codex for this facsimile, was cautious about the authenticity of this artifact, but ultimately argued that the document was created in the sixteenth century. Art historian George Kubler disagreed; he asserted that several images in Codex Hall show the influence of Egyptian sculpture and spurious archaeological texts of the late nineteenth century. It is unknown whether this artifact it was intended to fool archaeologists into believing that it was a genuine Aztec codex of the sixteenth century, or if it was merely intended as an artwork inspired by Aztec culture.

You can view the Special Collections & Archives facsimile of the codex in the reading room. There is also a fully digitized version of the accompanying analytical article by Charles Dibble alongside the silk screen facsimile here.