While it is undoubtedly so today, crime has been a part of everyday life in Los Angeles for more than a century. Scholars in numerous disciplines might use crime-related statistics when examining a variety of social, political, and economic trends, historical events, or notable individuals. Today, websites like the Los Angeles Police Department's Crime Mapping page let police officers and individual citizens find crime-related statistics, or search for reported crimes by type, date range, and address. 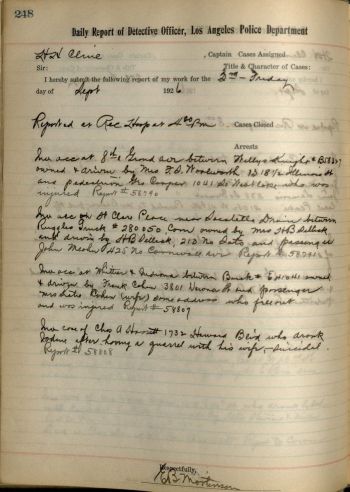 In the 1920s, the information was collected by individual police officers and detectives, and recorded in bound daily log books. Special Collections and Archives holds a set of four of these log books in the Detective E. B. Mortensen Daily Reports Collection. The collection provides Detective Mortensen's perspective of both routine and extraordinary events that took place on the streets of Los Angeles from 1924-1929.

Detective Mortensen's daily crime logs consist of assigned case reports and daily rundowns of his activities, as submitted to his supervising Captain. Each entry includes the day's date, time he reported for duty, locations around Los Angeles visited throughout the day, and time he left to go home. Where appropriate, Mortensen also included the number of interviews he conducted, arrests he made, reports he filed, calls he made, and the amount in dollars of stolen property he recovered. Each of the four volumes, which are dated 1924, 1926, 1928, and 1929, includes a name index.

A few highlights from September, 1924 include Detective Mortensen's encounter with a 13 year-old boy trying to sell stolen goods, and his work reviewing potentially stolen second-hand store items almost every day, a case that ultimately resulted in a four-day trial. He also investigated a child's disappearance in a lumber yard.

In September, 1926, Detective Mortensen wrote about his assigned cases from a "Psycho Ward" in a Los Angeles hospital. During his time at the psychiatric ward, he took note of some suicides, and some accidental or health related deaths, including the report of a man who "drank iodine after having a quarrel with his wife." After working at the psychiatric ward from May until September, Mortensen took a ten day vacation.

In 1928, Mortensen reported that he had returned to work at the station house. Some of the cases he worked on included assisting a detective from Atlanta, Georgia, whose prisoner was in a Los Angeles jail, a "dog-poisoning" case, and making arrangements for delivering 13 year-old boy in Cleveland, Ohio to his mother in Los Angeles.