Political cartoons are valuable sources that can distill the social and cultural norms of an age. This distillation occurs because political cartoons portray common issues and events in terms that are meant to be easily understood by the general readership of a given publication, or publications. Their use as primary sources requires the understanding of several concepts including symbolism, metaphor, irony, and caricature. The Merle H. Cunnington Collection is an excellent example of how political cartoons can express issues on multiple levels. 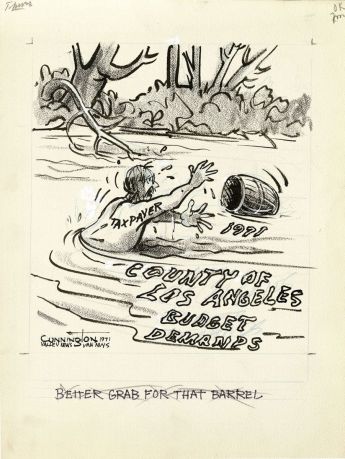 Merle Howard Cunnington was born near Sun Valley, Idaho in 1931. He studied history and political science at Utah State University, graduating in 1953. Cunnington worked at Chevy plant in Van Nuys, CA before getting a teaching job at Pacoima Jr. High School, where he worked from 1957-1960. His interest in art led his to study at the Otis Art Institute in Los Angeles. Cunnington used the pen name McHoward for the first years of his cartooning career. He began working as a free-lance cartoonist for the Valley News in 1964 and was doing five cartoons a week when he left in May of 1978, just a few years after the paper was bought by the Chicago Tribune Co. In 1975 he illustrated The San Fernando Valley by Jackson Mayers.

Merle Howard Cunnington made his living as a middle school teacher in the San Fernando Valley. He taught at Pacoima Junior High School for 3 years and then at Columbus Junior High School until his retirement in 1990. He also taught cartooning for children at Pierce College, and an Experimental Cartooning class at CSUN in 1977. In 1975 he illustrated a history of The San Fernando Valley by Dr. Jackson Mayers . He was also an editorial cartoonist with the Valley News & Green Sheet from 1964-1978. He also taught art and cartooning classes at Pierce College, the California State University Northridge Extension, and Ventura College.

The Merle H. Cunnington Collection of nearly 1700 editorial cartoons covering a wide array of topics. It includes a short handwritten autobiography, beginning with remembrances of Cunnington’s mother, and ending at the approximate time he stopped drawing for the Valley News.

Examples of Cunnington’s work reminds one of the saying "the more things change the more they stay the same." Recurring themes include the legalization of marijuana, rapid transit in Los Angeles and the San Fernando Valley, the environment, the state and national budget crises, education funding, and the fiscal infeasibility of Social Security.