Some Peek in the Stacks blog posts are authored by CSUN students who work in Special Collections and Archives. This week's post was written by Will Wyse, a student assistant in the International Guitar Research Archives. Will is a senior majoring in Guitar Performance. 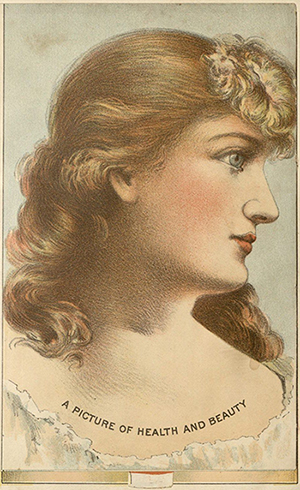 The nineteenth century often invokes flowery images of romanticism and heavily-embellished architecture. By today's standards, it can also be seen as an oppressive era for women especially with regards to society, marriage, and the household. The Vern and Bonnie Bullough Collection on Sex and Gender spans many topics including birth control, abortion, homosexuality, cross dressing, sex education, and prostitution, and includes numerous works demonstrating popular public opinion and more subversive, revolutionary ideas about appropriate roles for women during the 19th century.

Mary Virginia Terhune, known by her readers as Marion Harland, was an American novelist. A mother of three, Terhune wrote on domestic roles for women including etiquette, cooking, and the importance of maintaining a household. In these writings, she addresses in depth the oppression of women and the ways in which public opinion allows for it. In one of her first books concerning Woman in the household, Eve's Daughters, Terhune examines the value of women in the public's eye when she writes that, to a refined man, women are "…valued according to the amount of hard usage she will endure."  She goes on to write that wealthy women are to be "…treasured in a windowed cabinet…" These opinions depict the harsh perspectives of the time: wives and mothers worked tirelessly without recognition in part because it was expected of them to do so.

Dr. Eugene Becklard was a French Physiologist who published guides for single and newly married people that were intended to eradicate confusion and complications in conception and other ailments that plagued Victorian youth. In a stark contrast to Terhune's writings, Dr. Becklard employs a hefty dose of pseudo-science in order to explain various aspects of reproductive biology and the human body. In his book, The Marriage Guide, he states that "[c]onception cannot occur in feelings of horror or disgust. Hence, no woman ever became pregnant from a rape committed on her against her inclination." Even more striking than his medical revelations are his ideals regarding women. Dr. Becklard says, in short, that the ultimate goal of every woman's life is to be married. His opinion is very much a reflection of popular opinion and likely resonated strongly with contemporary readers.