William Hogarth was an 18th century English painter and printmaker, best known for his satirical and moral works. In his early career, Hogarth worked as an engraver decorating coats of arms and bookplates, and creating illustrations for books. While he started producing his own works in the early 1720s, he did not gain significant recognition until 1731, with the publication of his first moral work A Harlot’s Progress. This work and many later moral works typically consisted of a series of paintings that told a story depicting the consequences of immoral actions such as alcoholism, idleness, marrying for money, and reckless behavior. These paintings were then made into engravings, and the prints were then sold to the public as subscriptions. Hogarth’s works became so popular that they were widely pirated, which prompted 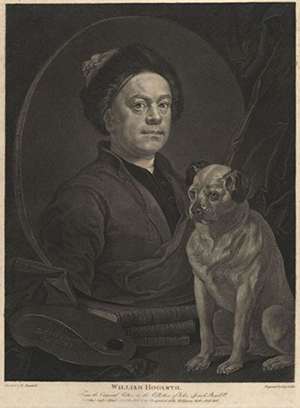 him to work diligently for the passage of the Copyright Act of 1735 by Parliament, which gave copyright protection to the original works of engravers.

Special Collections and Archives holds a number of Hogarth engravings that accompany works by Hogarth, and some that accompany works produced after his death. The department also holds works engraved by other artists modeled on plates and paintings originally done by Hogarth. While some Hogarth prints can be found in the Art and Print Collection, as well as in rare books like The Original Works of William Hogarth (1790), the majority of Hogarth’s works can be found in two archival collections.

The Lillian and Herbert Palmer William Hogarth Engravings Collection and the Dr. Leon Kolb William Hogarth Engraving Collection together contain around 130 engravings, including both individual works and series. Some of the notable items in the collections include the moral series A Harlot’s Progress and A Rake’s Progress. A Harlot’s Progress consists of 6 plates that tell the story of a young woman, M. Hackabout, who moves to London from the countryside and enters a life of prostitution. While she initially does well for herself, her life soon takes a downward turn as she is imprisoned and then dies from venereal disease.

A Rake’s Progress is a series of eight prints, produced in 1735, which depict the fall of Tom Rakewell, the son of a rich merchant who comes to London and spends all his money on gambling and prostitution, becomes imprisoned, and ends up in a mental asylum. Other types of works in the collection include a series of twelve illustrations Hogarth created for an edition of Samuel Butler’s 17th century satirical poem Hudibras and a number of portraits and individual pieces.