Some Peek in the Stacks blog posts are authored by CSUN students who work in Special Collections and Archives. This week's post was written by Will Wyse, a student assistant in the International Guitar Research Archives. Will is a senior majoring in Guitar Performance.

The 1930s brought a dramatic population growth to California due to poor farming conditions in other parts of the US, and a high demand for migrant workers in California. According to the U.S. Census, the state's population more than doubled from 3.4 million in 1920, to 6.9 million in 1940. In Los Angeles, this influx of migrant laborers was a catalyst for rapid urbanization, and the beginning of what would become a struggle for Los Angeles residents to find adequate living space.

One of the most economically devastating years of the Great Depression, 1938 preceded the swift economic growth brought upon by the United States’ entrance into World War II. This period in our regional history comes to life through M.S. Siegel’s Pictorial Representations of Some Poor Housing Conditions in Los Angeles, a report made by the Los Angeles Bureau of Housing and Sanitation, which depicts the extremely inadequate living conditions of densely populated areas in Los Angeles in 1938. These images reveal the dire living conditions faced by families and individuals whose poverty put them at risk for disease and exposure to the elements. 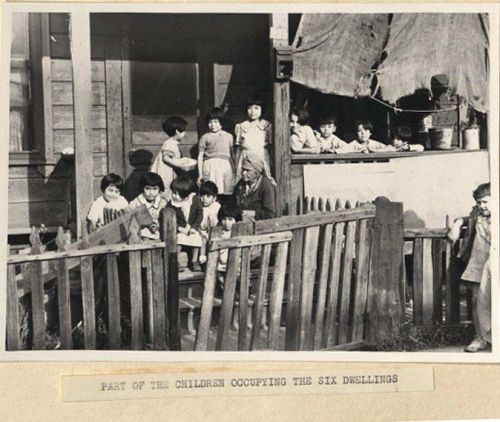 Common among nearly every living space photographed is the lack of indoor plumbing, which is something that was becoming common even in rural areas at the time. In addition, most of the houses did not have electricity, or the means to heat water indoors. As shown in one photo, communal water heating was used for up to fifty people. Another common aspect is the lack of ventilation in cooking areas. Many kitchens doubled as living quarters, with windows boarded up in efforts to keep homes warm and dry. Many of the dwellings were inhabited by anywhere from 6 to 11 people, and were often in what the health department called ‘slum conditions’. Altogether, these aspects contributed to the poor health of the slum's inhabitants.

Part of the Los Angeles Department of Health Publications Collection, Siegel’s, "Report of Slum Conditions," which accompanied the album, states that "…by furnishing low cost public housing to those most deserving we can inaugurate a program of slum demolition and at the same time possibly prevent the creation of new slum areas". In other words, the health department looked to demolish dilapidated housing completely, in order to build homes for tenants who were able to pay rent.

Although this report was compiled to bring attention to the slums of Los Angeles and improve their conditions, the solution that Siegel was proposing may not have been in favor of poor and working class people. Many of the sheds and dilapidated homes were ordered to be left vacant by the health department. However, the people that inhabited these dwellings often had nowhere else to go. This solution brought healthier living conditions to the area, at the cost of those who were most in need. Overall, the images compiled by M.S. Siegel expose what was once a very inadequate and harmful environment inhabited by extremely poor, working class Angelenos.