Monsignor Francis J. Weber is a distinguished Catholic scholar, an Honorary Chaplain to His Holiness the Pope, and the archivist for the Archdiocese of Los Angeles at the San Fernando Mission, as well as a former professor of history at Queen of Angels Seminary. Special Collections and Archives houses over 100 titles written by Monsignor Weber. Among them are miniature books, limited editions, and several printed by small or independent presses. Many are examples of all three simultaneously. 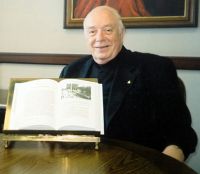 In another miniature book Weber discusses Angels Flight, a small railway in downtown Los Angeles. The railway is often called "The Shortest Railway in the World" and began operation in the Bunker Hill neighborhood of Los Angeles in 1901. Angels Fight was shut down and dismantled in 1969 and reopened just up the street in 1996.

Other subjects include Earl Warren, former Governor of the state of California and Chief Justice of the United States Supreme Court and Gaspar de Portola, Spanish explorer, soldier, administrator, and first governor of Alta California. Weber has also published books on iconic American topics such as The Goodyear Blimp, and even Disneyland.

Monsignor Weber has written extensively on the history of the Catholic Church. His narration of Church history in California includes histories of individual locations, including churches and missions. These include Saint Basil's Church in the Koreatown area of Los Angeles, The San Buenaventura Mission, two about the San Fernando Mission, and his Century of Fulfillment: The Roman Catholic Church in Southern California, 1840-1947.