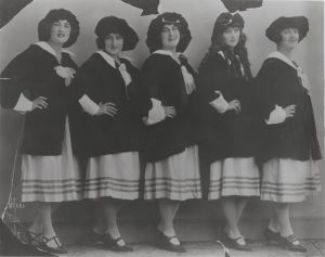 In the 1920s, the film industry exploded and Hollywood became the capital of the movie business. Young women from all over the country began coming to Los Angeles to try to make it big as screen stars. In some cases, women were exploited, taken advantage of, or became embroiled in scandals due to their youth and naiveté. Seeing the need for a safe haven, the Young Women’s Christian Association (YWCA) stepped in to provide women with a comfortable place to live, and a stable community in which to learn their craft.

Akin to a sorority, the YWCA established the Hollywood Studio Club in 1916 as a residence for young women seeking fortune and fame in Hollywood. The Young Women’s Christian Association (YWCA) of Los Angeles Collection documents the establishment, evolution, and achievements of Los Angeles' YWCA branches, including the Hollywood Studio Club, and consists of diverse materials such as administrative records, histories of the club, photographs, scrapbooks, and lists of residents.

In order to be admitted to the Club, applicants were expected to be seeking careers in some aspect of the film industry, whether as an actress, secretary, or another behind-the-scenes job. The Club operated as transient housing with residents staying anywhere from a few days to three years (the maximum residency), with meals and other amenities provided. Activities offered by the Club included classes in drama and other performing arts. It frequently hosted dances, teas, fashion shows, and other events for residents and their friends, and also provided its young residents with a great deal of freedom not usually available to women at that time. 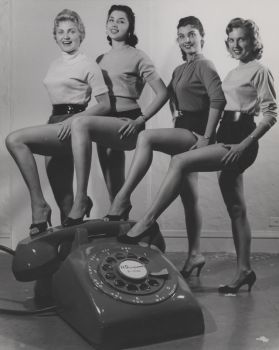 to make it big in Hollywood, the Club provided much needed support and comradery. As quoted in a history of the club contained within the collection, "The stream of girls which passes through its doors is endless. Some find success and fame and move on to more pretentious apartments or homes… some, discouraged, return to their homes… but all of them find in the Studio Club, during their stay in Hollywood, a home with a great deal of freedom, a certain sense of responsibility and an assurance of sympathetic advice and friendship."

The records of the Hollywood Studio Club include issues of their newsletter, dating from 1936-1962. Put out weekly, these newsletters acted as a bulletin for the residents, with details about upcoming events, recapped past events, and new residents, as well as reports on news of current or past residents, such as marriages, new jobs, women leaving the club, and advertisements for local businesses.

A large scrapbook documenting the club's history includes photos of many club events, as well as headshots of many residents throughout the decades. There were over 10,000 residents of the Hollywood Studio Club over the organization's nearly sixty year history, including several who made it big, such as Mary Pickford, Marilyn Monroe, Ayn Rand, Sharon Tate, and Sally Struthers.