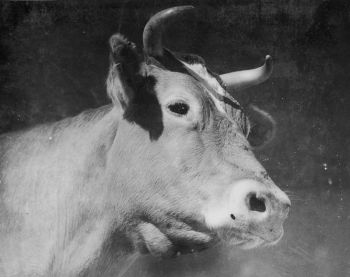 The Adohr Farms milk dairy was initially located in Tarzana, California at Ventura Boulevard and Lindley Avenue. Merritt Adamson and his wife Rhoda Agatha Rindge Adamson established the farm in 1916. The farm, dairy, and creamery were named after Rhoda, with her name spelled backwards as "Adohr." Rhoda's parents, Rhoda May Knight Rindge and Frederick Hastings Rindge, were business leaders and real estate developers with a 13,315-acre Malibu ranch.

At its height, Adohr Farms was advertised as one of the largest dairies in the world. In the late 1940s, the farm moved to Camarillo, and after Rhoda's death, the family sold the company to Southland Corporation in the mid-1960s.

The Adohr Farms Collection consists of publicity materials for Adohr Milk Farms, including photographs of dairy operations in Reseda and Buttonwillow, California, issues of the company newsletter Toreadohr, and films featuring farmland, livestock, and dairy operations. The promotional photographs celebrate the work of the dairy and its award winning herd with images of championship cows and steers, as well as visiting Hollywood royalty, popular 1930s child star Shirley Temple.

Many of the promotional images also emphasize the cleanliness and health virtues of Adohr Farms' dairy operations and milk. In the late 19th and early 20th century, rising concerns about unsafe or adulterated food products led to public outcries and the establishment of federal food safety regulations to protect consumers. Muckraking journalists and authors, like Upton Sinclair and his meatpacking industry exposé The Jungle, brought to light the poor sanitation and working conditions at many food processing facilities. Their work helped lead to the 1906 passage of the Pure Food and Drug Act, intended to ban foreign and interstate traffic in adulterated or mislabeled food and drug products. Before consumer safety laws were established, contaminated food, milk, and water spread infections like typhoid fever, tuberculosis, botulism, and scarlet fever.

For milk, the Grade A Pasteurized Milk Ordinance established uniform sanitation standards for the interstate shipment of Grade A milk and established a basis of milk safety laws in the United States. Early 20th century research also led to the discovery in 1916 that food, including milk, contained vitamins, and that diets deficient in certain vitamins could lead to nutritional deficiency diseases. Locally, the Los Angeles County Medical Milk Commission certified Adohr Farms' milk, and their milk won a number of awards at state fairs, livestock expositions, and dairy shows for its quality. Milk was not only food, but science too. When processed to contemporary standards, it was framed as a standard bearer of cleanliness and health.

Other collections in Special Collections & Archives that document livestock farming in the San Fernando Valley in the first half of the 20th century include the Kraemer-Milligan Family Collection, documenting John Thomas Milligan's California white leghorn breeding farm in the Lankershim area (now North Hollywood), the Charles Weeks Collection on the poultry colony in Owensmouth, and the Walter Jerome La Novia Ranch Collection .