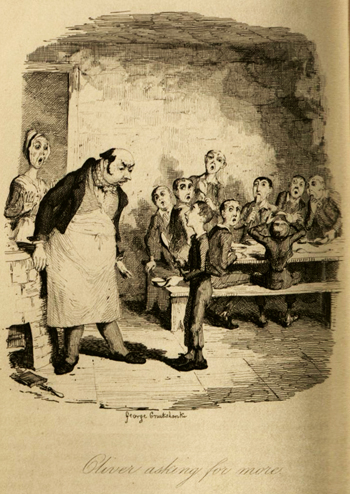 In 1836, English publisher Richard Bentley created and produced his first periodical publication, a literary magazine titled Bentley's Miscellany. He invited Charles Dickens to be the publication's first editor, banking on Dickens's fame and connections in the literary world to help make a success of the endeavor. Working under the pseudonym "Boz," Dickens used the opportunity to begin publishing his latest novel in serialized form in the magazine, accompanied by George Cruikshank's illustrations. Oliver Twist, or, the Parish Boy's Progress would become one of Dickens's most well-known novels, and was the first Victorian novel to feature a child as protagonist.

Readers bought each month's edition of Bentley's to keep up with the twists and turns of Oliver Twist's eventful and dramatic childhood. Born into poverty, Oliver finds himself and his fellow children near starvation in a workhouse, where he draws the short straw and bravely asks the master for more to eat. After much uproar, he is apprenticed to an undertaker who takes advantage of him and permits abuse by another apprentice. Oliver runs away to London to seek a better life, but falls in with a gang of child pickpockets run by a criminal named Fagin. When one of Oliver's adult victims catches him in the act, he opts to take Oliver home and care for him. The man, named Mr. Brownlow, notes Oliver's resemblance to a woman depicted in a portrait that hangs in his home. After many additional twists and turns in the plot, Fagin and most of the other criminal characters are killed or meet otherwise unhappy endings, Oliver's true parentage is revealed, and he is ultimately adopted by Mr. Brownlow.

Dickens became increasingly popular as he published two or three chapters of Oliver's story each month from February 1837 to April 1839, with Bentley profitting off high sales of his new literary magazine. While their professional relationship was a successful one by many measures, the two men ultimately had a falling out over editorial control, and Dickens resigned as editor in 1839. Bentley's Miscellany stayed in publication for several more years, featuring literary works by other notable authors and illustrators, including Wilkie Collins, George Cruikshank, John Leech, and Edgar Allan Poe, among others. Even so, it declined in popularity after Dickens's departure, causing Bentley to merge it with another magazine in the late 1860s.