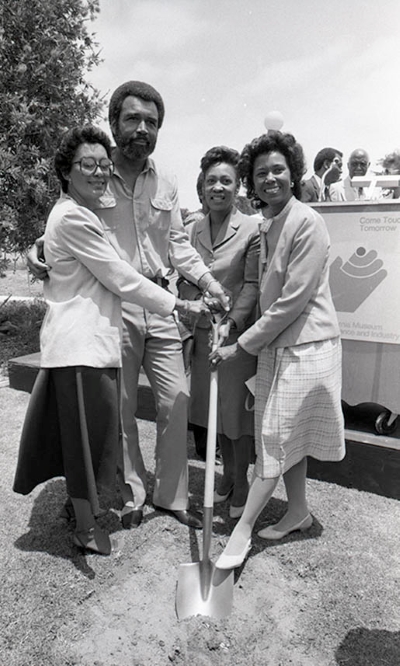 Several black female politicians appear in the Guy Crowder Collection whose careers were marked by many firsts. Two of those women, Yvonne Braithwaite Burke and Maxine Waters, have represented vast areas of Los Angeles during their long careers in public service, and many images of them are available online in the Tom and Ethel Bradley Center Digital Collections.

Born in L.A. in 1932, Burke attended Dorsey High School, graduated from the University of California, Los Angeles (UCLA), and received her JD from the University of Southern California (USC) Law School. Early on as a public defender, she co-organized the legal defense for those charged during the 1965 Watts Rebellion and the governor selected her to the McCone Commission, which studied the conditions that led to the unrest. Burke returned to California in 1978 to serve as the first African-American member on the Los Angeles Board of Supervisors. After failed bids for reelection and for 1980 State Attorney General, she continued serving L.A. in several capacities, such as Chair of the Metropolitan Transportation Authority Board of Directors and assisting with the opening of California African American Museum’s permanent location in Exposition Park. In 1992, she was elected again to the Board of Supervisors after campaigning at such places as the West Angeles Church of God in Christ and during the Kingdom Day Parade. She remained in office until 2008. For over 40 years, she has sought to improve the quality of life for children, BIPOC, women, and the poor, and to improve public transportation. She is now on the Amtrak Board of Directors and the California Transportation Commission. Images of Burke in the Crowder collection attest to her political and social activities at local ceremonies, press conferences, and campaigning events with other political luminaries from 1969 to 1997. 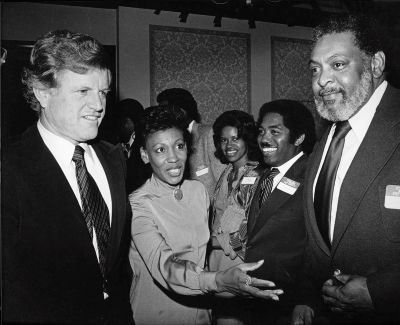 Maxine Waters has served sixteen terms in the U.S. House of Representatives from 1991 to the present and she currently represents the 43rd Congressional District of California. She is the first woman and the first African-American chair of the House Financial Services Committee. She is a member of the Congressional Progressive Caucus and the Congressional Black Caucus, which she was chair of from 1997 to 1999. Born in 1938 in St. Louis, Missouri, she moved to L.A. in 1961 and graduated from Cal State L.A. with a BA in sociology. During her 14 years in the California State Assembly from 1976 to 1990, she ushered in significant legislation such as landmark affirmative action, the first state Child Abuse Prevention Training Program, and prohibition of police strip searches on nonviolent misdemeanors. After the 1992 L.A. Uprising, Waters captured the public’s attention by bringing high-level government officials to South Central L.A. to appeal for more resources.

In the 1980s, she co-founded the Black Women’s Forum, a nonprofit organization for African-American women in L.A., and has formed strong ties within the Los Angeles African-American community through such activities as attending events for the Brotherhood Crusade, the NAACP, 100 Black Men, and the annual Black Family Reunion. As a prominent Democrat, she participated in five presidential campaigns, including Jesse Jackson’s in 1984 and Edward Kennedy’s in 1980, and is recognized as being an outspoken and bold politician in her advocacy. Over seventy digitized images of Waters in the collection attest to her community engagement with several organizations, cultural and political figures, and celebrities at local cultural and political events from 1973 to 1997.

Other black female politicians found in the collection include Diane Watson, Teresa Hughes, Doris A. Davis, Pat Russell, Shirley Chisholm, Marguerite Archie-Hudson, Carol Moseley Braun, and Karen Bass. You can find images of these women by searching and browsing the Guy Crowder Collection in the Digital Collections