Some Peek in the Stacks blog posts are authored by CSUN students who work in Special Collections and Archives. This week's post was written by James Richards. James is a sophomore majoring in Cinema and Television Arts. 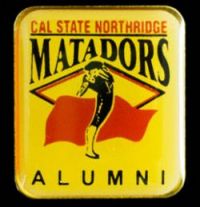 In 1958, students at San Fernando Valley State College chose the matador as their official college mascot. Other nominees, the Apollos and the Titans, were among the most popular mascot alternatives for their inherent and mythological ties to the sun. Many students felt that these two options were more suitable choices for the “sunshine campus,” but the matador won by popular vote. The 1958 Sundial editor-in-chief Bob Hilburn wrote in its defense, “The matador is the principal figure of the Spanish bullfight. He is regarded as the champion of his class…and is held in esteem as much as we consider our sport stars…there is an aura of classicism around the matador similar to our great artists of the theater and music.”

In Spanish-style bullfighting, the history of the matador is rooted in his acts of entertainment and dangerous spectacle. They dodge, sidestep and risk being maimed, gored, or outright killed by the bull, and few matadors returned from the arena unharmed.

Between 1975 and 1978, photographer Richard Cross captured 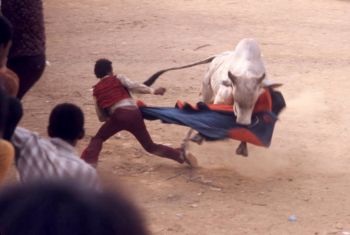 bullfights at San Basilio de Palenque in northern Columbia. Today, bullfighting outside of Spain has been mostly outlawed or replaced with a bloodless form so no bull is harmed or wounded as has been the topic of discussion in many animal welfare organizations.

Despite an initial backlash, the matador continues to be the official mascot of CSUN, and in 2011 was commemorated by the unveiling of a bronze statue of a matador, located on the Matador Walk south of Sequoia Hall. For sixty-two years, the matador has been featured on countless planners, stickers, buttons, pins, and other campus paraphernalia.