With the passage of the 1947 Collier-Burns Highway Act, the completion of a few early L.A. freeways (the Arroyo Seco Parkway, Ramona Boulevard, and the Cahuenga Pass), and the growing dependence on cars, freeways became massive construction projects in the 1950s and began transforming the L.A. landscape. 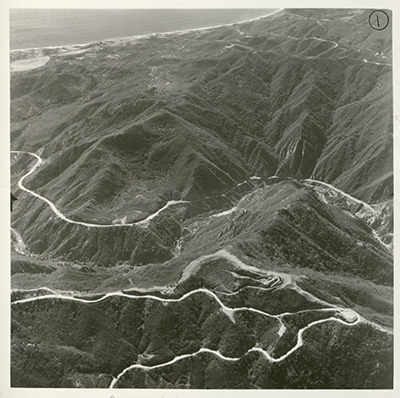 The Albert Zoraster Collection contains correspondence, articles, editorials, reports, maps, telegrams, presentations, and aerial photographs regarding the proposed CA-64 Malibu-Whitnall Freeway from the 1950s to the 1970s. The time period coincides with rapid development and urbanization in the San Fernando Valley, with multi-story buildings and major stores springing up in several neighborhoods. Albert Zoraster grew up in Topanga and resided in San Fernando from the 1920s to the 1970s. He dedicated most of his community service and long civic career to the areas of transportation and municipal services, participating in such committees and groups as the Mayor’s Valley Transportation Committee, the Valley-Wide Committee on Streets and Highways, the Van Nuys Chamber of Commerce, and the Van Nuys Rotary Club.

The CA-64 Malibu-Whitnall Freeway plans were laid out in 1963. Originally, Decker Canyon had been selected for the project in 1958, but Malibu Canyon replaced it. CA-64 would have connected the Pacific Coast Highway with the 101 Ventura Freeway, traveling north via Malibu Creek. The route would have then extended north and swung east to eventually meet the CA-170 and the I-5, traversing Van Nuys. The Valley part of the route changed after the Simi Valley CA-118 Freeway plans were finalized.

So why or why not build the CA-64? The collection attests to Zoraster’s strong pro-stance and the freeway’s supporters, such as most of the Valley’s Chambers of Commerce, the San Fernando Valley Industrial Association, and Malibu land companies. The supporters’ major concerns were overcrowded coastal highways and taxpayers’ lack of access to the beach, as expressed in a KNXT Editorial and several pieces of correspondence penned by Zoraster, the Chambers, and local businesses. When warm, inland residents flocked to the beach and thus created 2+ hour traffic jams (a familiar scene in the present day). Malibu residents wanted their ingress and egress. The opposition consisted of residents from both Malibu and the Valley, the Sierra Club, the Save Malibu Canyon Committee, and the environment minded. The opposers critiqued the drive to construct, coining then Governor Reagan’s phrase “the bulldozer mentality of the past”, and fought for preservation, reiterating the severe and irreversible damage on ecology and wildlife if crews blocked the water stream and disfigured the mountainous terrain. Letters from Save Malibu, a Calabasas resident, and the Sierra Club detail their grievances. 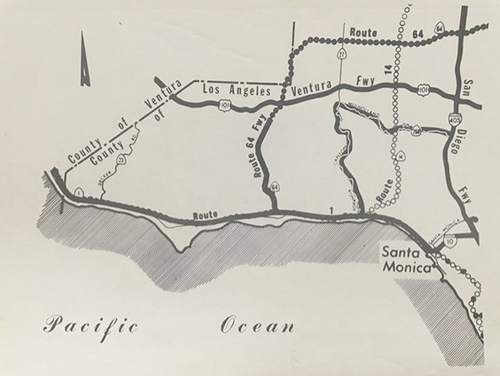 Other records to note are a ninth grader’s letter to Zoraster for a World Studies assignment, a resident’s response to the Engineering and Design Section after a well-attended and contentious Design Hearing in February 1970, and the Department of Fish and Game’s recommendations to prevent depletion of native habitats within the construction zone. There is also an aerial photo series containing shots of undeveloped land where the Malibu section would have been constructed.

The project hit pause in 1970 when the need for this freeway was repeatedly questioned. Authority was deferred to county and State Department of Parks and Recreation officials to determine how to best use Malibu’s land. Factors for halting the CA-64 included the high cost for property acquisition, on top of the high costs of constructing tunnels and excavating in Malibu’s mountainous terrain, the position of the Van Nuys Airport, which the freeway had to cross, and persistent ecological concerns. Hence, there is no CA-64, but there is the CA-27 (Topanga Canyon Boulevard) among others that connect the 101 to the PCH: including Las Virgenes Road/Malibu Canyon Road and CA 23 (Westlake Boulevard/Decker Rd.).

Past blogs on the topic of highways include "Rapid Locomotion via the Rubber-shod Steeds of Steel": Early Automobile Tourism, and related collections on urban planning include the American Planning Association, California Chapter Collection, the Dorothy Boberg Collection, and the West Van Nuys Chamber of Commerce Collection.