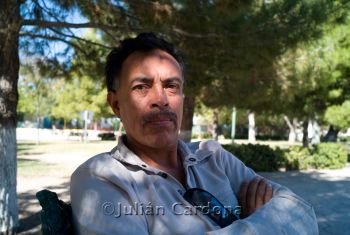 The Julián Cardona Collection documents violence and economic upheaval that has engulfed United States/Mexico border cities. Cardona’s work is internationally recognized, documenting transnational economic violence in Mexico, the resulting exodus of Mexican communities, and the emergence of the new Americans in the United States. The main geographical focus of the collection is on Ciudad Juárez beginning in 1993 through 2012. Other regions include the Juárez Valley, Agua Prieta, Altar, Anapra, Bisbee and other border cities.

Julián Cardona was born in 1960 in Zacatecas, Mexico, and migrated to the border city, Ciudad Juárez, with his family as a small child. He attended school in Juárez, received vocational training, and worked as a technician in the maquiladora industry. In 1991, Cardona went to Zacatecas to teach basic photography at the Centro Cultural de Zacatecas. In 1993, he returned to Juárez where he began his photojournalism career at El Fronterizo and El Diario de Juárez.

In the 1990s the city had several industrial parks and hundreds of maquiladoras. Jobs paying $5-$7 a shift lured 50,000-70,000 workers to the city. Population growth and meager wages led to the expansion of the drug market in the mid and late-1990s. Many victims of drug violence were poor and worked in the maquilas. Cardona's photographic work captures the experience and culture of working inside the maquilas and the individual lives affected by the industry.

In 1995, Cardona organized the group exhibition, "Nada que ver," or "Nothing to See." Photographs from this exhibition inspired the award-winning book, Juárez: The Laboratory of Our Future by Charles Bowden. This same year the economy boomed, the homicide rate soared, and Cardona began documenting the murdered and disappearing women of Juárez. Other projects included documenting the effects of globalization on the U.S.-Mexico border, the social effects caused by low wages paid in border factories, the immigrant exodus, economic collapse, shantytown communities and slum conditions, violence, poverty, and the social upheaval he witnessed. Cardona continued to document Juárez through the recessions of 2001 and 2008, which weakened the maquila economy, ultimately resulting in over 100,000 vacant houses across the city. Collaborating with journalist and author Charles Bowden, Cardona worked on the project resulting in the book Exodus/Éxodo, documenting the exodus of the city's inhabitants.

The Cardona collection includes over 25,000 images documenting transnational economic violence, the resulting exodus of Mexican communities, and the emergence of the new Americans in the United States.  A selection of more than 1800 images are available in the Library Digital Collections.