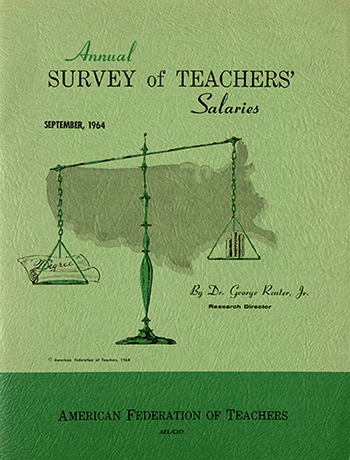 The California Federation of Teachers (CFT) has 120,000 members, and is one of the largest affiliates of the American Federation of Teachers (AFT), one of two major national organizations for the classroom teacher. Effective lobbying efforts in the state capital have made the CFT an important factor in the passage of many educational reform measures as initiatives. The organization was founded in 1919 to unify the various educational union locals under AFT sponsorship. In addition, the CFT represents teacher interests within local school districts, and provides a central collective voice for classroom teachers throughout the state.

In the 1940s, Los Angeles Local 430 became the largest CFT unit. The Oakland 1946 CSFT convention proposed the creation of a union newsletter. The California Federation of Teachers Collection holds the first issue, dated August 1948. During the Cold War, Local 430 was suspected of harboring Communists. When the AFT investigation disclosed there were "radical" elements among the local's leadership, Local 430's charter was revoked and a new affiliate formed.

The union gained momentum in the 1950s under the leadership of Ben Rust, who served as president from 1951 to 1957. The collection includes Ben Rust's daily journals from his presidency. It also includes interesting teachers' aids such as the 1958 USDA pamphlet called "Ranger 'Rithmetic" for seventh grade teachers. When the House Un-American Activities Committee (HUAC) began investigating public school teachers, the CFT pushed the California department of education to not follow their lead. It paid legal fees and sponsored court cases for teachers who came into conflict with local school systems. CFT also advocated for passage of the Brown Act of 1961, which gave public employees the right to join employee organizations of their own choosing. The union thus gained a legal right to exist and to challenge the supremacy of their larger rival, the California Teachers Association (CTA). In the 1960s with the help of the AFT, a nationwide salary survey was done to help with pay equity. In the years before such work, teachers’ salaries were often arbitrary and not based on merit.

A hallmark of the CFT has been its close affiliation with organized labor since its founding. Aided by funds from the AFL-CIO, scores of locals were chartered throughout the 1960s and new members enrolled by the thousands. Beginning in 1968, CFT President Raoul Teilhet spearheaded the final drive to win collective bargaining in California. This led to the passage of California’s Rodda Act (Senate Bill 160) of 1976.The act arranges for employer-employee relations and personnel management in California public schools and community colleges. This collective bargaining law provides for the creation of Employment Relations Boards, exclusive recognition of a single employee union, and good faith negotiations.