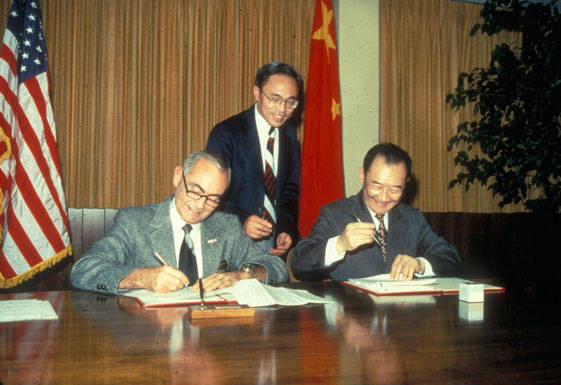 In 1978, CSUN President James W. Cleary began working on a plan to improve the campus’ international reputation. Step one; initiate an international student and teacher exchange program. As one might expect, it took several years for such a program to become firmly established. In November 1983, Cleary’s administrative assistant Kay Kellogg said, “… the program is just now becoming operational.” By this time, exchanges with China, Brazil, and Poland had occurred, and an estimated dozen students and a dozen teachers had already participated in exchanges with China.

CSUN began hosting delegations from China as early as 1979. In April 1981, Cleary led a delegation to the People’s Republic of China (PRC) to identify exchange opportunities between CSUN and universities and technical institutes in China. As a result, in July 1981, just three months later, CSUN faculty, students, and members of the community participated in a six-week Chinese-language program at Jinan University. In addition to language lessons, participants engaged in lectures on Chinese culture, art, history, and geography. Additionally, they were treated to sightseeing in Guangzhou province, home to Jinan University.

This delegation returned to CSUN with signed preliminary agreements from three Chinese institutions, Jinan University in Guangzhou (Canton), Beijing (Peking) Institute of Technology, and Harbin Institute of Technology. They also returned with educational materials and Chinese artifacts, like this one, that were gifts to the University. Reciprocal visits by Chinese educators occurred in 1984, including a six-day visit that included trips to CSUN’s audio-visual center and computer center as well as to Universal Studios and Disneyland.

The China Institute was established at CSUN in 1982 to “serve as an academic and cultural activity center relating to China,” and it continues to do so. For over 40 years, CSUN has cultivated relationships with educational institutions throughout China. These ties continue. A quick look through the China Institute’s webpage provides information on grants and scholarships for both faculty and students. The former are encouraged to “start a project in their discipline that researches on some China-related issues or promotes long-term exchange and collaboration with some Chinese universities.” The latter is presented with funding options to pay for their year abroad.

CSUN has had long-standing and varied partners in Chinese academia for decades, but don’t think that’s the only international opportunity to be found in the university’s history. CSUN has also collaborated with universities in Russia, Poland, and Brazil to name but a few.