"The Naturall Language of the Hand" 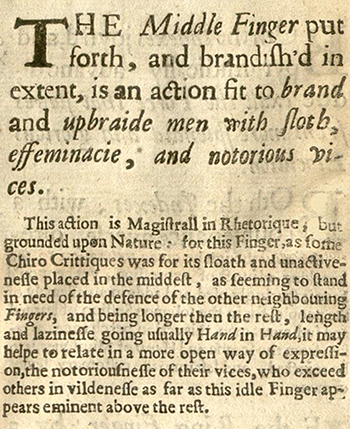 American Sign Language, the predominant sign language used by deaf communities in the United States and much of Canada, began in the 19th century. Prior to its creation, local sign languages were developed and used in the US and around the world. Our knowledge of these early sign languages is contained within contemporary written works that primarily described what are called "manual alphabets," or fingerspelling systems. Special Collections & Archives has one such work, Chirologia, or, The Naturall Language of the Hand, published in London by John Bulwer in 1644.

Toward the end of his work, Bulwer discusses "Rhetoricall Indigitations," or finger alphabets and number systems. While he mentions that finger alphabets were in use by deaf people at the time of publication, he also explains that they could be used by hearing individuals as "an Alphabet of Privie cyphers, for any kinde of Secret intimation." He goes to great lengths to emphasize this point, later stating they can be used for "private wayes of Discourse or Intelligence." He includes a series of diagrams showing hands forming the shapes of letters and numbers, which bear little resemblance to modern American or British sign language, and concludes his work with a discussion of the use of gestures by ancient and modern orators.