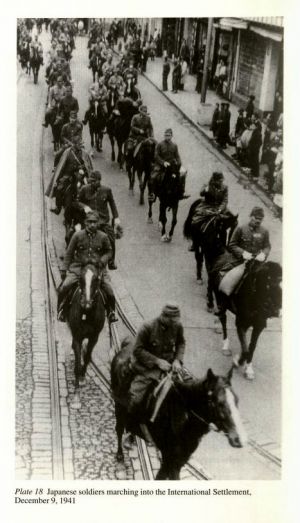 Japanese incursions into China began as early as 1931, shortly after the Mukden (or Manchurian) Incident. The following six years saw several smaller incursions, both military and political. In Asia the Second Sino-Japanese War began with the full-scale Japanese invasion of China in 1937. Two years later, World War II began when Germany invaded Poland. The conflicts merged in 1941 when the US entered the war following the Japanese attack on Pearl Harbor, Hawaii.

After taking control of much of Asia early in the war, the Japanese controlled nearly a quarter of the world's population. They imprisoned civilian citizens of enemy nations who were in Japanese-occupied territories without trial, forcibly interning them in camps around Asia. The word "internment" refers to the imprisonment of enemy citizens in time of war, and has been misapplied to camps in the US that held Japanese Americans.

In Asia, the Japanese Imperial government interned approximately 130,000 Allied civilians, most of whom were Dutch, British, American, and Australian. The majority of internees from Allied nations were held in the Dutch East Indies (now Indonesia). The Japanese held 12,000 in China, including in the British colony of Hong Kong after its surrender on Christmas Day, 1941, and in the International Settlement in Shanghai after the Japanese took control on December 8, 1941, as the Pearl Harbor attack occurred on the other side of the International Date Line.

There were several internment camps in China throughout the war, and many individuals who were imprisoned there returned or emigrated to the United States in the years following the war. Some of the camps represented within Special Collections & Archives holdings are the Shanghai-area camps of Lunghua (or Lunghwa) Civil Assembly Centre, Pootung Civilian Assembly Center, Chapei Civilian Assembly Center or Chapei Camp, Yu Yuen Road Camp, and Yangtzepoo Camp, and the Stanley Internment Camp off the island of Hong Kong. Special Collections and Archives is home to a variety of sources regarding these camps, many of which are memoirs or autobiographies authored by individuals who were imprisoned in the camps.

The collection also includes secondary sources about the subject likeWartime Shanghai and Captives of Empire: The Japanese Internment of Allied Civilians in China, 1941-1945. These books can offer background information and provide context as well as details and informative images. For instance, Captives of Empire includes a “Nominal” roster of internees listed by camp, including names, transfers to other camps, and ingest and release dates. Several images from the book can be seen as part of this post.

Renée Azevedo Logan was born and raised in Shanghai. Her grandmother fled Russia with her children in the 1920s, settling in Shanghai. Her book, Shanghai Times, discusses life in the city. Chapters include “War in Asia” and “World War II in Shanghai,” both of which include descriptions of life in occupied Shanghai. The book also describes the fate of Ms. Logan’s uncle, presumed to have died at Pootung Civilian Assembly Center after being picked up by Japanese authorities and imprisoned there. Other sources can include fictionalized accounts of real events, such as those in Empire of the Sun by J.G. Ballard, who spent two years at the Lunghua Civil Assembly Centre as a child.

Special Collections and Archives also holds numerous archival collections in the Old China Hands Archives that document the experiences of Allied civilians imprisoned in camps within Japanese occupied territory during the war. For instance, Eric J. Schmidt spent time in the Chapei Camp outside of Shanghai. Gloria Watson Curtis Kliene, a British national born and raised in Shanghai, was imprisoned in both the Yu Yuen Road Camp and the Yangtzepoo Camp with her family. Patrick Young was a member of the Hong Kong Naval Volunteer Reserve during World War II and was interned during his service in China.