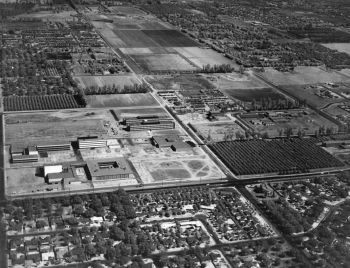 Special Collections and Archives holds several collections and publications that tell the story of the founding of California State University, Northridge. The saga has been documented by emeritus history professor John Broesamle in his 1993 history of the university, Suddenly a Giant, through photographs in the University Archives Photograph Collection, and in the Judge Julian Beck and Homer A. Halverson Collections. The story begins in 1947 when the California state legislature established Los Angeles State College (LASC) which opened on the Los Angeles Community College campus the same year. Shortly thereafter, in 1952, the legislature appropriated funds for a campus in the south Los Angeles community of Baldwin Hills.

Concerns arose among members of the legislature’s Education Committee regarding the Baldwin Hills site almost immediately. Among those concerns were issues of safety, such as a potentially self-igniting peat bog. In addition, there were local objections regarding its proximity to both UCLA and USC, and the growing population in the San Fernando Valley, over half a million by 1952. In January 1953, Assemblyman and San Fernando resident Julian Beck introduced a resolution directing Public Works to rescind approval for the Baldwin Hills site and consider alternatives. Beck was interested in having a 4-year college in the San Fernando Valley but there was real competition. In 1954, Public Works approved site acquisition in the San Fernando Valley while at the same time the State Director of Finance was looking elsewhere and the current "downtown" location of Cal State LA (formerly LASC) was finalized.

Los Angeles State College president Howard McDonald entered the fray with his campus business manager Warner Masters, who went on to have a distinguished 30 -year career at CSUN. Together they lobbied state legislators for a second state college campus in the Los Angeles area. The birth of what would become California State University, Northridge occurred in 1955, when the legislature approved the purchase of land in the San Fernando Valley for a state college. The search for the perfect location was on and several options were considered, among them; a site near Hansen Dam; Tarzana, at the south end of Reseda Blvd; a site near Griffith Park; Birmingham High School; the current site of the Veteran’s Hospital in Sepulveda; and of course the current site of CSUN.

Both McDonald and Masters favored the Tarzana or Veteran’s Hospital sites but eventually settled on the current location which was then agricultural land. The 165-arce parcel purchased by the state included squash fields, orange groves, walnut orchards, and eucalyptus clusters. McDonald advocated for a got concurrent development of the Los Angeles and San Fernando Valley campuses, in both the physical spaces and the curriculum. Ceremonial groundbreaking in Northridge was January 4, 1956 and a cluster of temporary buildings was quickly erected. In 1957 construction began on the first permanent building on campus, the library (which was unfortunately demolished following the 1994 Northridge earthquake.)