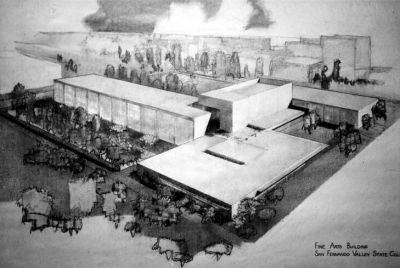 The Library Digital Collection features historically significant documents, photographs, oral histories, artistic works, and exhibit materials selected from Special Collections and Archives. Additional project contributors include local heritage organizations, neighboring academic institutions and private collectors. This week's blog post focuses on the Richard Neutra Fine Arts Building, which was completed in early 1960 and was demolished in 1997 after the damage it received from the 1994 Northridge Earthquake. You can find images of the no longer standing Fine Arts building and many other campus buildings in the Library Digital Collections.

San Fernando Valley State College (SFVSC), now CSUN, was established as an annex of California State University Los Angeles, in the mid-1950s. By July 1958, the campus had become an independent college and the campus developed, the construction of new buildings was one of its first priorities. In early 1959, the campus built a gymnasium, a cafeteria, dorms, and parking. At this time, campus administrators were in the process of researching and making decisions about the design of a Fine Arts building. According to the Daily Sundial, decision-makers toured various Junior Colleges, State Colleges, and Universities in California, hoping to incorporate the best features into this new building. The Art Faculty noted, "We believe that this will be one of the finest Fine Arts Buildings in the whole State of California." The prominent Southern California modernist architect, Richard Neutra, was commissioned to design the new Fine Arts building, and construction was completed in March, 1960. The building was located where Manzanita Hall now stands, between Monterey Hall, Nordhoff Hall, and Cypress Hall. It had a gallery, offices, and classrooms, and was the venue for many fine art exhibits and other events.

One interesting piece of history is a disagreement between 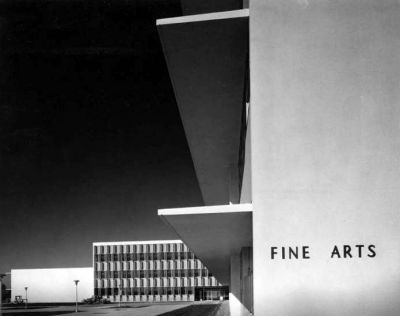 campus administration and students, regarding what some considered an objectionable art piece intended to be displayed in the building. This piece was Edward Kienholtz's, "Bunny Bunny You’re So Funny," a sculpture of a partially nude female from waist to knees, wearing a garter belt and chain link fishnet hose. Administration decided that the piece would be more appropriately exhibited in a parked camper truck next to the Fine Arts Building, rather than in the gallery. An article in the Daily Sundial from March 29, 1963, describes how students believed that the Faculty Senate was engaging in censorship, and that they should not have the ability to censor art. This caused a larger move that involved the President and a vote by Faculty Senate. The Faculty Senate decided that the sculpture would be displayed in the camper, and Kienholtz responded by saying his piece was "fine art," not a "side show," and withdrew the piece.

Thirty-one years later, the 1994 Northridge earthquake shook the San Fernando Valley, and caused severe damage to the campus, including the Fine Arts Building. While the campus reopened its doors not long after, many of the buildings were deemed unsafe, and classes were held in other buildings and bungalows. In the case of the Fine Arts building, because it was structurally unsafe, students and faculty had to use the Arts and Design center and the Halsted Village, a group of temporary buildings, located on the north side of campus, to teach, learn, and conduct other business. Because the Arts and Design Center was not intended to hold so many students, many lectures were held outdoors on the courtyard, and some classes on the courtyard would have to sit on the floor. Many students and Faculty complained about this new set up, because they would have to endure the temporary buildings for a few years before the campus decided to either fix or demolish the Fine Arts Building.

Finally, in 1997, a decision was made about the status of the building, the Neutra Fine Arts Building was deemed unstable, unsafe, and incapable of holding students, classes, and exhibits, therefore it was demolished. Today, the Art department continues to use the Arts and Design Center for classes and exhibits. Art and Art History courses are held in Sagebrush Hall across the street from the Design Center. Having classes across the street from the Design Center was a request from the Faculty in 1997. They asked that when a new building was built, that they build it closer to the Art and Design Center so as to not feel so separated from each other. One piece of the Fine Arts Building continues to live near its original location, near Monterrey Hall, Nordhoff Hall and Manzanita Hall, titled "Steel Sculpture Group" by Jan Peter Stern.