The route for the transcontinental railroad, constructed between 1863 and 1869, crossed the distance from Omaha, Nebraska to Sacramento, California, but before construction could begin, land surveys had to be performed. In 1853, the United States Congress appropriated $150,000 to fund land surveys for the proposed railway conducted between 1853 and 1855 under the direction of Secretary of War Jefferson Davis. Five potential routes were studied by Brevet Captain George B. McClellan and the Corps of Topographical Engineers whose stated charge was to "discover, open up, and make accessible the American West," as stated in the resulting published findings Reports of Explorations and Surveys, to Ascertain the Most Practicable and Economical Route for a Railroad from the Mississippi River to the Pacific Ocean (vol. 1, p. 4.)

Reports of Explorations and Surveys... is not merely a set of land surveys, but encompasses a broad range of studies in geography, geology, zoology, botany, paleontology, and ethnography. The knowledge gained by these surveyors was a factor in trans-Mississippi western migration, and marked the beginning of a quick and significant reshaping of the natural landscape. Observations within the volume not only mark the routes for passenger/freight travel and the communities that would line them, but also provide unique insights into the ways in which human migration has altered the physical plane. 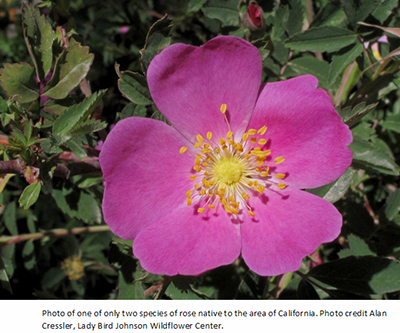 One of the most interesting aspects of these surveys is an alternate route, with its western terminus in Los Angeles, referred to as "the route near the 35th parallel." Of particular interest is the section on botany, in which the survey team noted and described various flora, including such information as location and habitat, physical descriptions, and scientific nomenclature.

Captain Marcy speaks of "charming landscapes; of soil remarkable for fertility; vegetation in old Indian corn-fields twelve feet high; of beautiful springs and streams; of natural meadows with clothed with luxuriant grasses; broad and level bottom-lands covered with dense crops of wild rice, and of excellent timber, large and abundant." (4)

The images below represent a handful of the California native plants surveyed by Lt. Whipple and his team, particularly those encountered in the last leg of their journey, "from the Mormon road to the Pacific," and include plants found in San Bernardino, Riverside, and Los Angeles Counties. Note how these few examples compare to the plants and flowers that can be seen in an average daily commute anywhere in Los Angeles, for example, roses (8 native species), gerbera daisies (native to South Africa), and palm trees (only one native species).

Surveys like this demonstrate the impact people have had on the world in which they live. It is impossible to know where we, as a community, are in the natural evolution of our world if we have nothing against which to make a comparison. Does this seemingly insignificant transplantation of decorative flora impact our worldview? Our environment? Our state of mind? Or does it not impact any of these things?