Interpreting a Trove of Forms and Applications 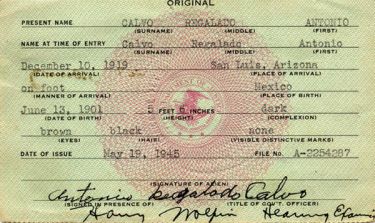 For many of us, filling out applications and forms is a tedious task. In our daily lives, there are varieties of documents we must fill out to conduct business. On their own, these documents may not seem to be very valuable. Yet, for researchers, completed forms and applications may reveal a treasure trove of information about an individual's experience, their family and community, cultural traditions, socio-economic status, and more. Special Collections and Archives holds many of these types of documents, some of which are available in the Library Digital Collections.

Becoming a U.S. citizen by going through the U.S. naturalization process can be a long and challenging exercise. This was the case for Blandina Guerrero Rodriguez, who traveled as an eight-year-old child from Durango, Mexico and established lawful residence in El Paso, Texas in 1903. It wasn't until 1952 that she began the naturalization process by filling out an Application for a Certificate of Arrival and Preliminary Form for a Declaration of Intention provided by the U.S. Department of Justice. This form holds a great deal of information about Blandina including her physical characteristics, marital status, family members, family of origin, and former and current residences. The information in this completed form combined with other records in the Felipe And Blandina (Guerrero) Rodriguez Family Papers tells us not only about Blandina and her family, but informs our understanding of the immigrant experience and provides many leads for further research.

Forms and applications for membership in clubs and societies can reveal some interesting information about individuals and the organizations with whom they are affiliated. The Elective Study Club membership application, is part of the San Fernando Women's Club Collection. As we learn from the finding aid, The San Fernando Women's Club was initially established after the merger of local women's clubs in 1926, including the Elective Study Club, which was founded in 1907. This club met to provide charity and service to the community as a place for "intellectual and social improvement," and we can see that this individual was a member of the Elective study Club two years prior to the merger. To place this organization in context, we can look at some of the other digitized items from the San Fernando Women's Club Collection, which work to document the history and development of the San Fernando Valley.

Although forms and applications may seem like insignificant pieces of paper, they can provide a wealth of information about the history of individual people and their backgrounds, communities and organizations, the shaping of cultural and ideological views over time, and the ways in which documents fit together to form meaning through interpretation.