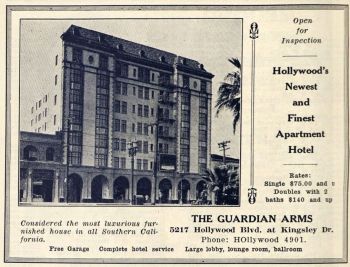 Los Angeles’ population rapidly grew in the early 20th century, partially due to the efforts of boosters and the nascent film industry. The Official Los Angeles Key from December 1913 described the city as a space where "opportunity clasps hands with ambition, while enterprise and success are the twin virtues that lure the man of moderate means, as well as the capitalist, to the land where his fondest hopes and dearest anticipation may be realized." Los Angeles was a place for everyone, but that also meant that this influx of new Angelenos needed a place to live, regardless of their economic level.

Those that came looking for a new abode may have come out independently, leaving family homes and communities behind. Many newcomers to town initially settled in temporary rental spaces, while gaining their footing. Seasonal workers especially found temporary housing key in giving them a location to sleep at night near their place of employment. Before the mid-20th century rise of garden apartments, with their emphasis on nature-filled open spaces, and dingbat style buildings with boxy exteriors and first level parking, shared Los Angeles rental spaces were often residential hotels or furnished apartments. Individuals from all class backgrounds utilized these shared spaces, though individual buildings and types of shared spaces were often targeted toward a certain segment of the population.

At this time in Los Angeles, long before the internet and craigslist, how could a new Angeleno find one of these spaces of their own to rent? Promotional guides were one way to connect prospective tenants with their potential new digs. Some printed guides, like the "Los Angeles Apartments and Hotels” brochure, were allied with a specific group of hotels and apartment buildings. This brochure asked the reader, "Why spend hours and days looking for that ideal place to live?...SAVE TIME AND ENERGY - FOLLOW THE EXAMPLE OF THE TRAINED HUNTER WHO HUNTS ONLY WHERE GAME IS TO BE FOUND!" The Downtown Rental Bureau of Consolidated Hotels, Inc. advertised itself as a "HUNTER'S PARADISE," with more than 100 hotels and apartment houses on offer for those looking for rental spaces.

Apartments became a reputable living option for middle class residents, and by the 1930s were seen as distinctively separate from hotels or earlier boarding houses. As the advertisements in these brochures demonstrate, early apartment buildings often came furnished. This was an advantage for renters in seasonal employment, or those individuals that needed to move frequently for work. Different types of apartments catered to different economic levels, with efficiency apartments as bargain versions of more elaborate early apartment hotels. For apartment dwellers in smaller units without kitchens, local restaurants and hotel cafeterias became a key part of daily life, which can be seen in the types of advertisements targeted at apartment renters.

Hotels were also a popular choice, especially for the wealthy and upper middle class able to afford a residence in centrally located palace hotels featuring prestigious architecture and elaborate service options. Later in the 20th century several downtown Los Angeles hotels converted into single room occupancy (SRO) rentals, but when these elaborate hotel spaces were first built, they were spaces for the rich to reside and show off their wealth. The rise of palace hotels began in the late 19th century. These locations offered first class amenities and became city landmarks. The very wealthy often lived in penthouse suites on the top floors. The amenities of palace hotels provided a high level of service with multiple servants for every resident. Elderly well-to-do residents benefited from having large cadres of staff to serve them, without the responsibilities of supervising servants in their own homes. The potential for public spectacle and status flaunting in the shared public spaces of hotels also led those with freshly minted wealth to often prefer long term occupancy in hotels as opposed to private apartment spaces.

Although homeownership has long been seen as part of the American Dream, the road to the dream is often paved with rental spaces. Apartments and palace hotels offered individuals a space of their very own, and a flexible mobility that allowed newcomers to Los Angeles to move closer to opportunities or cement their status in a central, public space.

Special Collections and Archives holds many collections that highlight urban development in Los Angeles, including the California Tourism and Promotional Literature Collection, the Harry Fryman Collection, and the  Los Feliz and Silverlake Real Estate Collection, to name a few.