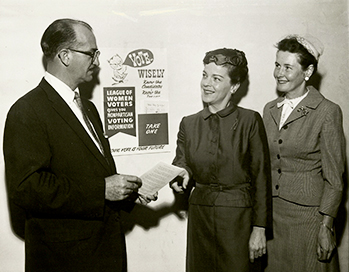 The League of Women Voters of Los Angeles began donating its archival records to CSUN's Urban Archives, then in the History Department rather than the library, in 1979. The League of Women Voters of Los Angeles Collection has continued to grow from subsequent donations over the intervening decades, and provides thorough documentation of the League of LA's mission, activities, and impact. In keeping with its philosophy that continuing political education is necessary to the success of any democratic government, the League is a non-partisan organization with members who subscribe to myriad political beliefs.

The League's primary purpose is to promote political responsibility through informed and active citizen participation in government. It works to promote education, government efficiency, legislative actions that support a democratic society, and international cooperation. It focuses on the qualifications individual candidates possess rather than supporting or opposing them, and in general supports and organizes a number of programs and projects to inform the electorate and help citizens vote.

In 1921 the national League of Women Voters, then just a year old, merged with an existing women's organization in California, the California Civic League, which already had chapters in many cities throughout the state. Women in Los Angeles established a chapter that same year, and participated in the first statewide League of Women Voters convention in California in 1922. Many changes in local, state, and national legislation occurred through the Los Angeles League's efforts. In the late 1920s, national and California chapters worked together to establish a formal voter registration system. California adopted such a system in 1930.

The League helped revamp the civil service system within California, which had been in place since 1913, and worked in support of numerous reforms to the state constitution. Over the years, the Los Angeles League has focused its energy and attention toward voter education and other voter service activities with a special focus in some eras on educating California residents from other parts of the country. Issues of ongoing significance to the League in Los Angeles have included crime, housing, homelessness, childcare, criminal justice, education, public health, the environment, and the city charter, among others. The collection primarily consists of printed matter created or collected by LWVLA, including minutes, agendas, booklets, fact sheets, flyers, League position statements, member training aids, public relations material, reports, speeches, election materials, research files, press clippings, and more.